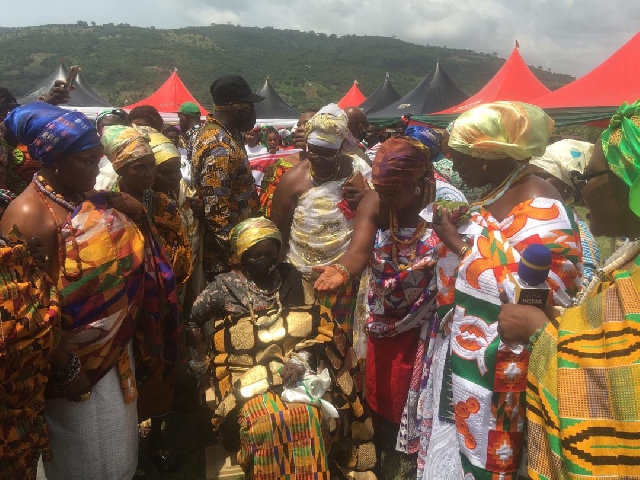 The vice-presidential candidate of the National Democratic Congress (NDC), Professor Naana Jane Opoku-Agyemang was, on Tuesday, 27 October 2020, enstooled as the Yingor (forwardness Queen) of all the traditional areas within the North Tongu constituency of the Volta Region.

Under the stool name Mamaga Yongor I, the first female vice-presidential candidate was taken through the customary rites by the queen mothers of the various Tongu traditional areas and led by Mamaga Adzo Sreku IV of the Mepe Traditional Area.

Mamaga Sreku explained that Prof Opoku-Agyemang deserves to be honoured, as she happens to be the first female vice-presidential candidate of a major political party.

Speaking at a durbar held in honour of the candidate to usher her into the region for a three-day introduction tour, Mamaga Adzo Sreku also noted that the honour is necessary because of the developments the entire Tongu constituency benefitted from the government of Mr Mahama and the NDC administration over the years.

Also addressing the running mate with her delegation from both regional and national levels, the Manklalo of the Dorfor Traditional Area, Togbe Manklalo Agnohla VI, commended the NDC for leaving no stone unturned in development matters of the Tongu constituency.

He acknowledged projects such as water, schools from primary to secondary levels and roads, as some of the legacy projects of the erstwhile government of Mr Mahama, who is seeking re-election on December 7.

The chief was, however, unhappy that projects that were started under the NDC administration have been abandoned by the Akufo-Addo-led government for the past four years.

He mentioned the 540-m Volivo bridge, a government of Ghana and Japan-sponsored bridge on the Volta Lake, that is expected to ease transportation challenges between communities beyond the lake and the Eastern corridor road, Battor, Adidome and Juapong roads, as an example.

Togbe Manklalo also indicated that, should Mr Mahama regain power in the December polls, the revamping of the Juapong textile company should be one of the NDC government’s priorities.

He also spoke about the disturbances in the region staged by the Western Togoland secessionist group and the involvement of the state security.

The chief, however, appealed to the Nana Akufo-Addo government to release “innocent people” who have been arrested in connection with the Western Togoland happenings.

Prof Opoku-Agyemang expressed appreciation to the chiefs, queen mothers and the people of the area for the honour bestowed on her and the entire NDC party.

She said she was marvelled at how the chiefs and the queen mothers praised the erstwhile NDC government and the Member of Parliament (MP) of the area, Mr Samuel Okudzeto Ablakwa, which, she noted, makes her work easier, as she tours other parts of the constituency.

She, therefore, called on the people to vote for Mr Mahama and Mr Samuel Okudzeto Ablakwa in the December polls.