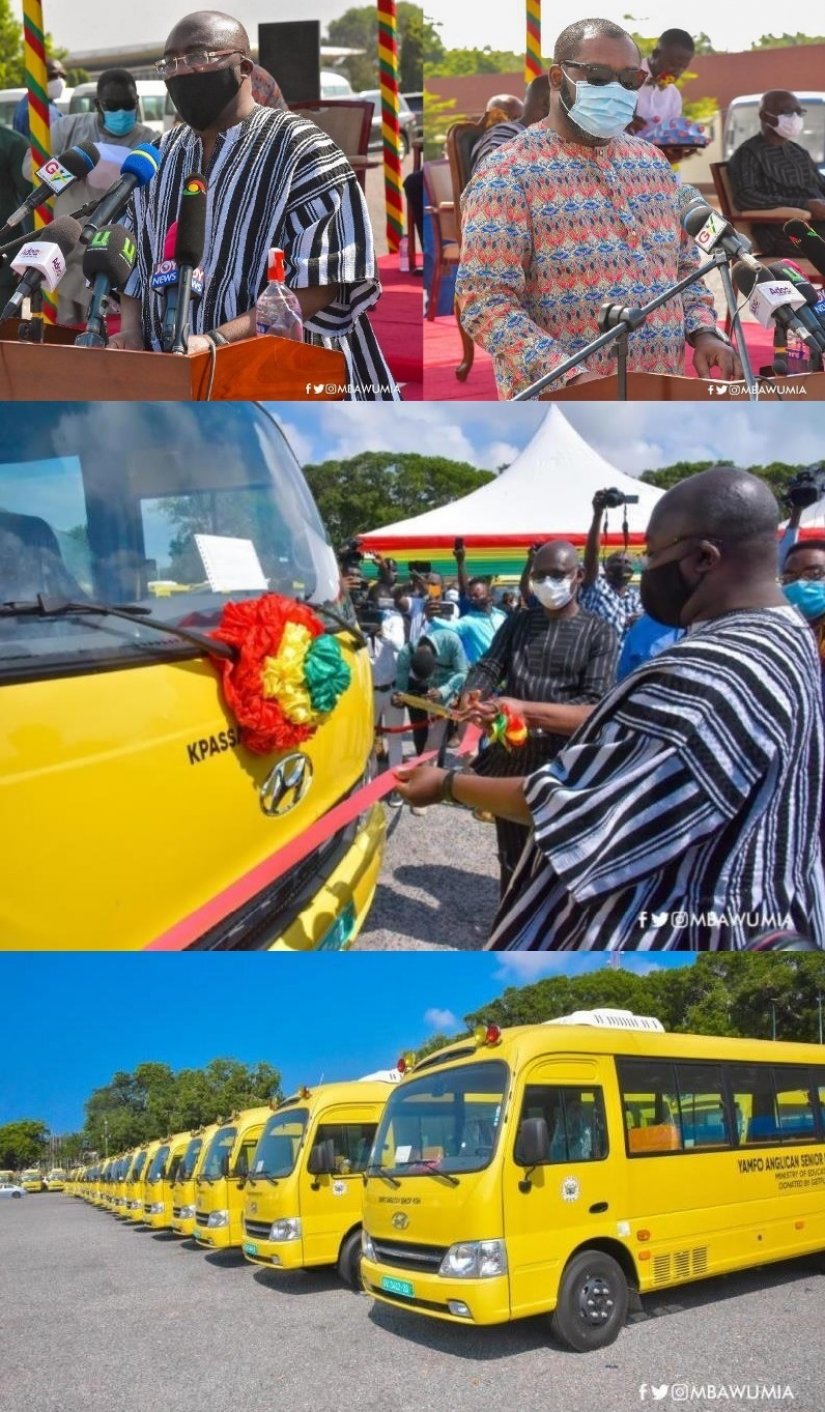 The donation formed part of the 350 buses government promised second cycle educational institutions that did not receive buses in 2016.

Government would soon take delivery of the rest of the 250 buses for onward distribution.

The Government has also procured some Pick-up vehicles for School Administrators, which would soon be distributed.

In March this year, government presented 365 double cabin Pick-up vehicles to some District, Municipal and Metropolitan Directorates of Education and Agencies, whilst 493 motorbikes were given to circuit supervisors for effective supervision.

At a brief handing-over ceremony in Accra, Vice President Bawumia said equipping educational institutions and frontline managers with the requisite logistics was key in transforming the country’s education system for the better.

In that regard, he said, the Akufo-Addo led government had prioritised quality education delivery to enhance human resource development and accelerate national development.

Dr Bawumia noted that since the assumption of office in 2017, the Government had been pursuing education reforms to address logistical and infrastructure challenges.

Therefore, the presentation of the vehicles would go a long way in addressing the logistical constraints and enhancing the delivery of quality education to Ghanaian children.

He entreated the beneficiary schools to take good care of the vehicles to serve the purpose for acquiring them.

The Vice President commended the Minister of Education, Dr Matthew Opoku Prempeh, for his stewardship of the sector and gave plaudits to the Finance Ministry for making funds available for payment.

For his part, Dr Matthew Opoku Prempeh, the Education Minister, said the handing-over of the buses was a fulfilment of government’s promise to equip second cycle educational institutions, which demonstrated its commitment to reform the education sector.

He cited the implementation of the Free Senior High School (FSHS) programme as a demonstration of the Akufo-Addo led government’s unwavering determination to ensure that, every Ghanaian child has access to quality education.

He noted that there had been several attempts by detractors to discredit the implementation of the FSHS programme, saying; “Any government that stifles education has no good intention for the good people of Ghana”.

Professor Kwasi Opoku-Amankwa, the Director-General of the Ghana Education Service, who took delivery of the keys of the buses from the Vice President, lauded the government for prioritising education and showing a lot of commitment towards enhancing teaching and learning in the country.

He pledged the GES’ commitment to take good care of the vehicles to serve the purpose for acquiring them.

The ceremony was attended by Professor Nicolas Nsowah-Nuamah, the Board Chairperson of the Ghana Education Service Council, Mr Kwesi Nyankah, the Minister of State in charge of Tertiary Education, and some selected heads of second cycle educational institutions.