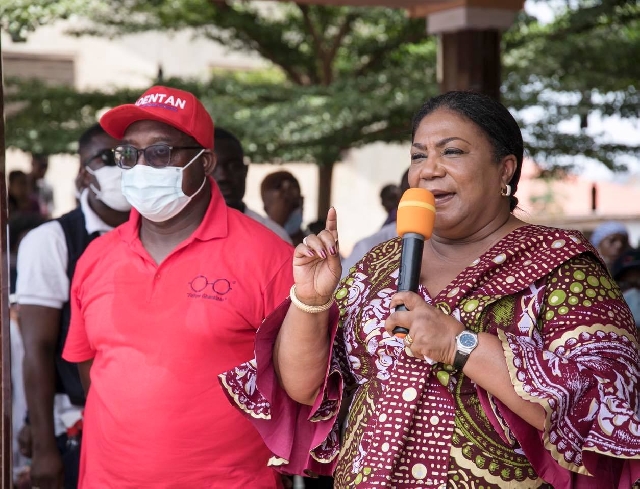 First Lady Mrs Rebecca Naa Okaikor Akufo-Addo has urged constituents in Adenta to vote massively for President Akufo-Addo and the New Patriotic Party MP for Adentan, Mr Yaw Buaben Asamoa, in the upcoming December general elections to ensure that the government continues with its good works.

Mrs Akufo-Addo said the NPP government, in its first term of office, under the leadership Nana Akufo-Addo, has implemented several social intervention policies and executed many infrastructural projects to set Ghana on the path of agenda “Ghana beyond Aid.”

The First Lady said Nana Akufo-Addo believes that enriching a nation’s human resource base while industrialising the country is a sure way to ensuring sustained economic growth.

She said this is what influenced the President to implement policies such as Free SHS, 1 District 1-Factory, and Planting for Food and Jobs, which are all geared at empowering the people to build a vibrant industrial economy.

At the Adentan and Ogbojo markets where she met with traders, the First Lady urged them to vote massively for President Akufo-Addo and the parliamentary candidate for a brighter future for their children and announced that the Rebecca Foundation, which she heads, has started the processes to build a crèche at the Adentan market to provide a conducive place for their children.

She assured them the Rebecca Foundation will continue to complement the efforts of the government to address the development needs of Ghanaians especially women and children.

As part of her tour of the constituency, Mrs Akufo-Addo also visited the Frafraha Health Centre where she interacted with Hospital management and staff as well as some patients and donated Hospital beds, nose masks, sanitisers, diapers, bed sheets, blankets, detergents and thermometer guns to the facility to assist them in their health delivery.

The First Lady congratulated the staff of the facility for contributing their quota in ensuring minimal impact of the COVID-19 pandemic, despite the risks and expressed the government’s appreciation for their sacrifices.

Mrs Akufo-Addo ended her tour with a durbar of traditional leaders, community leaders and people at Ogbojo where she was welcomed by a large enthusiastic crowd, chanting “four more for Nana to do more”

Mrs Akufo-Addo expressed her appreciation to the people for their ecstatic welcome and thanked the Adentan Constituency for supporting the Akufo-Addo government in its first four years in office stating that the many projects in the area of education, health and road construction which have been executed in the Adentan Constituency should encourage the people to vote for President Akufo-Addo and Yaw Buaben Asamoa in the coming December elections, to do more.