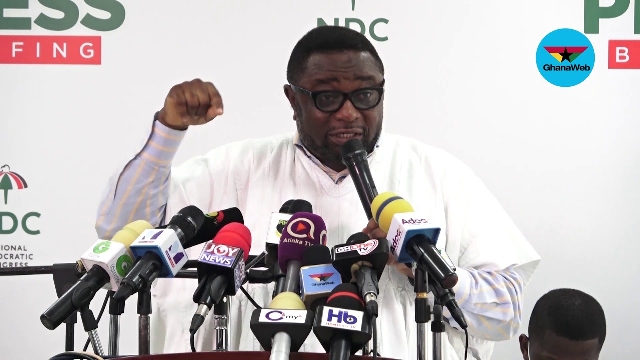 The main opposition National Democratic Congress (NDC) has accused some security officials in the Ghana Armed Forces and the Ghana Police Service of conniving with the government to intimidate and attack its supporters on a daily basis in the ongoing voter registration exercise.

Addressing a press conference in Accra on the reported cases of violence at some registration centres in the ongoing exercise on Wednesday, 22 July 2020, Mr Elvis Afriyie Ankrah, the Director of Elections of the NDC, said: “Even more bizarre is the active involvement of some unscrupulous security officials, belonging to the once-revered Ghana Armed Forces and the Ghana Police Service, in these shameful acts of intimidation and barbaric attacks on NDC supporters and innocent civilians.”

According to him, “This state-sponsored thuggery, as we have sometimes seen, is fast-eroding all the gains we have chalked under our Fourth Republican democratic dispensation, and has the potential to plunge our once peaceful nation into total chaos.”

The NDC says although it has provided pictorial and video evidence of some barbaric attacks against its agents and supporters during the registration exercise, till date, “no concrete action has been taken by our security agencies to punish the perpetrators of these brazen acts of violence, and to protect our supporters and innocent Ghanaians from further attacks.”

“It is this inaction, and in some cases, the complicity and/or tacit approval of our security agencies, that has emboldened NPP thugs and brigands to escalate their atrocious attacks on NDC supporters and innocent civilians across the country, with utmost impunity, over the past two weeks,” Mr Ankrah stated.

According to him, innocent NDC officials and supporters are being harassed on a daily basis by the security agencies, which, he said, neither see nor hear “all the evil that the ruling NPP and their state-sponsored thugs are unleashing.”

Mr Ankrah has, therefore, urged all NDC supporters to “defend themselves in line with the spirit of our 1992 Constitution, against any violent attacks by NPP thugs and any state-sponsored goons.”