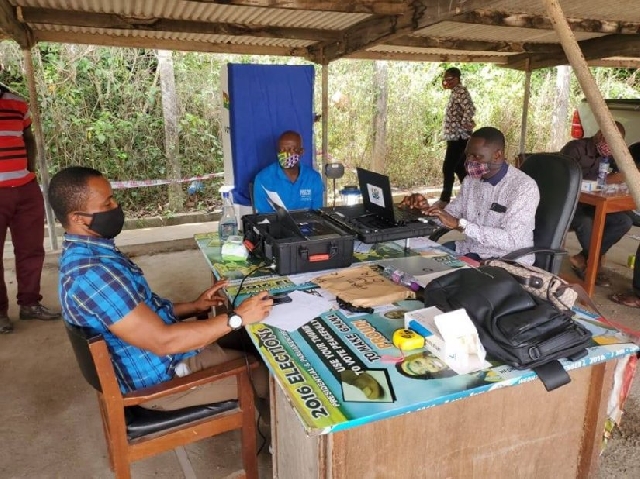 Some unauthorised persons prevented some applicants from registering at the M/A J.H.S New Tafo registration centre in Abuakwa North in the Eastern Region in the just ended voter registration exercise across the country, the Coalition of Domestic Election Observers (CODEO) has disclosed.

The applicants were prevented from registering based on their being non-resident in the community.

The Electoral Commission (EC) began the compilation of a new voter roll for the December polls on Tuesday, 30 June and ended on Thursday, 6 June 2020.

The EC, in a bid to capture persons who could not take part in the mass registration exercise, organised a two-day mop-up exercise on Saturday, 8 and Sunday, 9 August 2020.

A preliminary report by CODEO on the exercise covering Phases 4, 5, and 6 and the two-day mop-up exercise carried out at the various district offices of the EC noted that: “Unauthorised persons were found at 16% of cases observed. At the M/A J.H.S New Tafo registration centre in Abuakwa North in the Eastern Region for example, unauthorised persons prevented some applicants from registering on the basis of non-residence.

“Observers reported of acts of intimidation and violence by some persons at a few centres (1%). For instance, on August 2, 2020, at the Funeral Grounds registration centre, Akanyakrom in Banda in the Bono Region, a group of men entered the registration centre and assaulted some registration applicants in the queue, resulting in a temporary suspension of the registration exercise. At the 12 Apostles Church Kormantse registration centre in Mfantseman in the Central Region, a man on July 23, 2020, slapped a party agent who had advised him to use the ‘Challenge’ procedure instead of attempting to physically prevent an applicant from registering.

“On August 8, 2020, during the mop-up exercise at the EC office in Takoradi, an unauthorised person who was trying to interfere with the registration exercise but was driven away by stationed police officers subsequently called in a group of stoutly-built men who claimed to be national security operatives. The group arrived in two pick-up vehicles obviously to confront the police officers who had left the centre before their arrival. Shortages of registration materials were recorded in less than 1% of observed cases. In 18% of cases, there were persons stationed around registration centres available to guarantee for registration applicants.

Also “On the last days of each of the three phases (Phases 4, 5, and 6), observers noted that about 2% of observed centres had people who wanted to register after the 6 PM closing time.”

According to CODEO, its observers “reported that the mop-up exercise was generally smooth across the various offices of the EC which they observed. While some registration centres recorded very low turnout, others had some voters who could not register at the time registration was closing on Sunday, August 9, 2020.

There were also a few cases “where some political party activists and hooligans either physically prevented or attempted to physically prevent some registration applicants from accessing registration centres during the mop-up exercise simply because they claimed they did not know the applicants. Such incidents were reported from the Jomoro constituency in the Western Region, Wa East in Upper West, Nkoranza South in Bono East and Ayawaso West Wuogon in the Greater Accra region.”