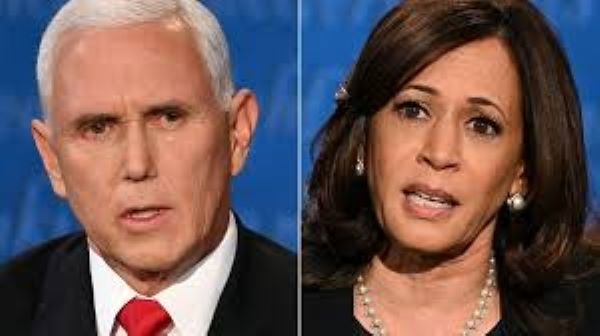 The contenders for US vice-president have clashed over the coronavirus pandemic in their only debate ahead of next month’s election.

Democrat Kamala Harris called Donald Trump’s handling of the pandemic “the greatest failure of any presidential administration” in history.

Opinion polls indicate the Republican president is trailing by single digits in a handful of battleground states that will decide who wins.

Vice-presidents have tie-breaking power in the Senate and are required to step in if a president is unable to perform their duties. Their day-to-day responsibilities vary with each administration, but they typically serve as top advisers and some take on specific policy portfolios.

Wednesday night’s meeting was a civil debate between two smooth communicators compared to last week’s belligerent showdown between Mr Trump and Mr Biden, which degenerated into insults and name-calling.

Mr Pence did not interrupt as much as the president last week, but when he did, Ms Harris interjected: “Mr Vice-President, I’m speaking, I’m speaking.”

The viral moment on Wednesday was a fly landing on Mr Pence’s head and remaining there for some two minutes.What was the main talking point?

In the 90-minute live debate at the University of Utah in Salt Lake City, Ms Harris accused Mr Pence and the president of deliberately misleading Americans about the lethality of coronavirus.

“They knew, and they covered it up,” she said, adding that they had “forfeited their right to re-election”.

Mr Pence accused the Biden-Harris campaign of copying the White House’s pandemic strategy, alluding to a blunder that ended Mr Biden’s 1987 run for the presidency when he plagiarised a speech by then-British Labour leader Neil Kinnock.

Ms Harris was asked by the moderator whether she would take an approved Covid-19 vaccine distributed ahead of the election.

The 55-year-old California senator said she would not take a jab touted by Mr Trump without the say-so of medical professionals.

Mr Pence, who heads the White House coronavirus task force, retorted: “The fact that you continue to undermine public confidence in a vaccine if the vaccine emerges during the Trump administration I think is unconscionable.”

The plexiglass barriers separating the two debaters seated 12ft (3.6m) apart were a vivid reminder of the pandemic that has killed more than 200,000 Americans.

The president – who is himself recovering from the virus – returned to the White House on Monday evening after three nights in hospital, with his opinion poll numbers drooping.

On Wednesday he declared that catching the disease was a “blessing from God” that exposed to him to experimental treatments he vowed would become free for all Americans.

The virus, meanwhile, has spread through the West Wing of the White House and infected figures inside the president’s re-election campaign.No standout winner but Democrats will be happy

Vice-presidential debates seldom shake up presidential races, and the face-off between Kamala Harris and Mike Pence on Wednesday night seems destined to be no different.

Both candidates had strong moments, and a few stumbles, over the course of the 90-minute affair. But as far as lasting memories go, they were few and far between.

If this was a match that showcased the futures of the Democratic and Republican parties, the real fireworks will have to wait for the coming years.

An unmemorable result, in and of itself, is good news for the Democrats and Joe Biden, who polls suggest are leading in the race. One more campaign set-piece in the books, and one step closer to election day.