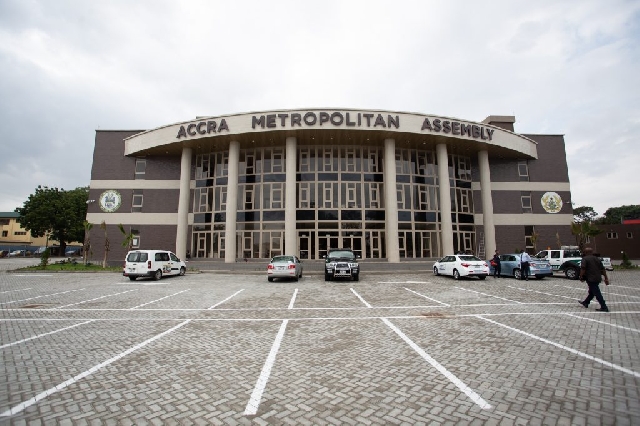 The Accra Metropolitan Assembly (AMA) has called on the public to ignore a publication that alleged that it had undertaken the opening of a toilet facility without its officials wearing face masks as part of safety protocols to prevent the spread of COVID-19.

The assembly added that it will not undertake any activities in these times of COVID-19 without adhering to the safety protocols.

This response comes on the back of the publication of a photo which went viral on social media purported to be the commissioning of a toilet facility by the Minister for Inner City and Zongo Development, Mustapha Abdul-Hamid and the Accra Mayor Mohammed Adjei Sowah.

A statement issued and signed by its Head of Public Affairs, Gilbert Nii Ankrah noted that: “Although the said publication did not confirm when this event took place, it states that both the Minister and the Accra Mayor appeared without facemasks, mischievously suggesting that the event took place amidst the COVID-19 pandemic.”

According to the AMA: “There is no iota of truth in the publication and that the said event which took place as far back as 20 January 2020 was an inspection of some 250 completed household toilet facilities constructed by the Akufo-Addo Government for residents of Jamestown and Chorkor at no cost to the beneficiaries.”

The Assembly emphasised that: “As the photographs depict, there was heavy media presence at the said event and the records are there to verify.”

The AMA also noted that over “27,000 toilets have so far been constructed in various homes in Accra since 2017 under the government’s one household; one toilet project which seeks to promote cleanliness and eliminate open defecation by ensuring that there is a toilet facility in every house.”

Also, “under the Greater Accra Metropolitan Assembly Sanitation and Water Project (GAMA-SWP) which was supported by the World Bank, the Government of Ghana pays 70 per cent of the construction cost for the toilet facility while households bear the remaining 30 per cent, however, in this particular instance the Ministry of Inner City and Zongo Development absorbed the 30 percent hence the inspection.”

The AMA assured the public that as an institution, “it would not undertake any activity or event especially during this time of COVID-19 without adhering to all the safety protocols and in this instance the wearing of a facemask.”

It further urged the public to ignore the said publication and treat it as “propaganda and mischief intended to attack and discredit the hard-earned reputation of government officials.”