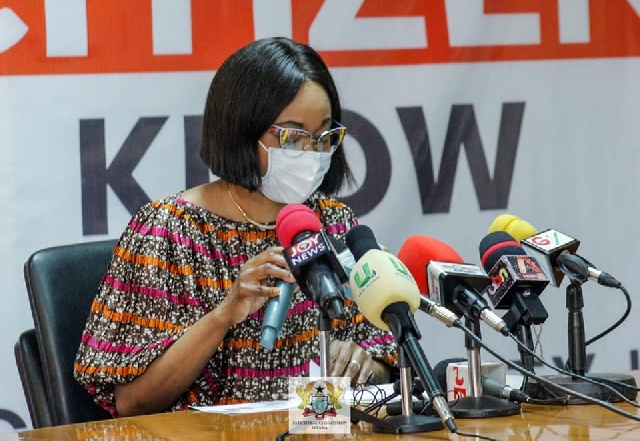 The Electoral Commission of Ghana has said it would not shield any of its staff found to have taken part in the alleged registration of some 66 Ivorians in the Bono Region.

In a statement, the EC said: “Our initial investigation reveals that the said registration occurred in Banda Kabrono in the Bono Region”.

“As a Commission determined to compile a register, which reflects eligible Ghanaians only, we take this matter very seriously”, the election management body said, adding: “The Commission has launched a full-scale investigation into the matter and will not shield any staff (permanent or temporary) found to have been involved in the alleged illegal registration of foreign nationals”.

Meanwhile, the EC has said had it maintained the old register and not compiled a new one, the existing roll would have been bloated by 3 million after it had added more voters to the old document through a limited registration exercise.

At a press conference in Accra on Friday, 7 August 2020, Deputy EC Chair Dr Eric Bossman Asare said: “The Commission’s main objective of compiling the new voter register was to ensure a credible and a clean voter register, which would stand the test of time”.

So far, he said, “the numbers the Commission has been able to register is a testament to our mandate as an election management body (EMB) that seeks to undertake processes that ensure we deliver elections that are free, fair, and meet international standards”, pointing out: “A clean voter register is the basic foundation for ensuring that clean, credible, and transparent elections are delivered to the people of Ghana”.

“Apart from this, we also had 797,493 people quarantined on the Duplicates/Multiples and Exceptions lists. The political parties are aware of this. When this is added to the registered voters, the overall total is a little over 17.6 million.

“Had the Commission maintained the old register and conducted a limited registration exercise in all electoral areas and registration centres, across the country, we would have estimated to conservatively add about 2 million Ghanaians on to the existing register.

“Potentially, without the compilation of a new voter register, the Commission was on track to register some 19 million people plus another 800,000 people, who remain on the multiple and exceptions lists, who previously were denied the right to vote. “This would have given us a total number of almost 19.6 million persons, approximately 20 million, had we maintained the old register and conducted the Limited Registration Exercise as compared to the current figure of 16.63 million, some 3 million difference.

“With the compilation of this register those on the duplicates/exceptions lists from 2012 have had the opportunity to register”, Dr Bossman said.

In conclusion, he said the “Commission’s objective of ensuring a credible register is on track”.

“With an estimated population of 31 million, many experts will agree that a voter population between 50 to 55% of the total population for a country in sub-Saharan Africa is acceptable. At the current rate, and after the registration is completed and the register is certified taking into consideration the de-duplication process, we may have around 53% of the population in the register

“According to the Ghana Statistical Service’s estimates, Ghanaians who are at least 18 years are 17,624,686, which is approximately 57% of the estimated population of almost 31million.

“This means the numbers we are on track to register are well be within the threshold of those who qualify to vote.

“In the next few days when the entire process to certify the register is completed, the total number of registered voters will be announced to the general public.

“As a Commission we are pleased with what we have been able to do so far, and we are looking forward to the cooperation of all stakeholders for the success of our 2020 activities”, he noted.