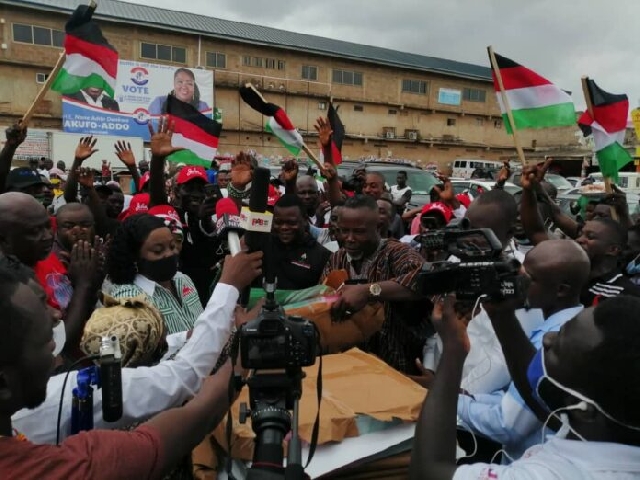 Obuobia Darko-Opoku on Monday declared her unwavering support for the National Democratic Congress (NDC) parliamentary candidate for Weija-Gbawe constituency ahead of the 2020 general elections.

Ms Darko-Opokumade the declaration when she donated 14 motorbikes, 10,000 posters of the parliamentary candidate as well as 20 megaphones to the party’s constituency office.

Addressing members of the party during a short ceremony to present the items, she said the donation will help in the effective prosecution of the NDC’s campaign strategies with the singular focus of delivering Ghanaians from the bad leadership of President Akufo-Addo and the New Patriotic Party.

Following the emergence of Cleland Nii Ayaa Ayison as the NDC’s parliamentary candidate for the constituency, some executives and party organizers were not happy with his candidature.

In her address, therefore, the former broadcaster did not mince words when she called for unity in the partyahead of the polls on December 7.

“Our candidate is only one and if you love Obuobia then you must love the candidacy of Cleland Nii Ayaa Ayison.

“Therefore, together we should step out on December 7 and vote massively for John Dramani Mahama and Cleland Nii Ayaa Ayison,” she declared.

She further noted while speaking to the media that “it was important to make it clear to them it’s constitutional if you go through primaries and win and the candidate here is constitutionally elected. So, we all must throw our weight behind him and help him to win the constituency.”

“So, this is my personal donation to the constituency to make it clear to them that although I am not contesting, they need to know that I am part of the constituency and I shall lead this campaign,” she added.

Ms. Darko-Opoku said she found the rejection of Nii Ayison worrying thus, the need to step in to unite the party in the constituency for the task ahead. “So, it’s important for me to show up and let them know that my interest is to win the seat with the elected candidate.”

On his part, Nii Ayison thanked Ms. Darko-Opoku for her unflinching support, saying with unity the Weija-Gbawe seat will be delivered to the NDC.