Wenger reveals why Mourinho doesn’t feature in his book 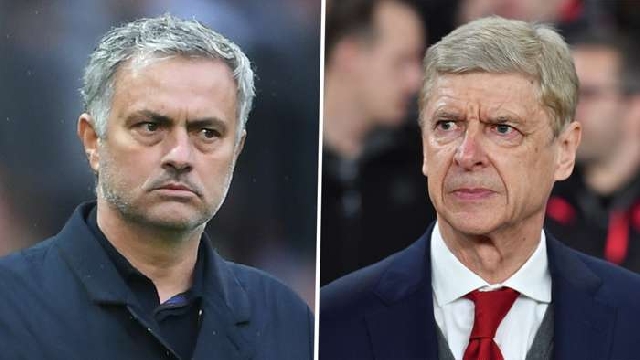 Arsene Wenger has explained that the reason he made no mention of long-time rival Jose Mourinho in his autobiography is because the Tottenham manager is still working, citing the same reason for omitting Liverpool‘s Jurgen Klopp and Manchester City boss Pep Guardiola.

Wenger, who is currently employed by FIFA as their chief of global football development, has spent many years locked in a war of words with Mourinho, with the latter most notably referring to his opposite number as a ‘specialist in failure’.

Following the release of Wenger’s book, ‘My Life In Red And White’, Mourinho continued the barbs when asked why he thought he was not included, claiming that his dominant win record over the Frenchman was likely the cause.

“You are not going to do a chapter about 12 or 14 matches and never win one so why should he speak about me in his book?” he told the press. “A book is a thing to make you happy, to make you proud so I understand perfectly the situation.”

Wenger responded by saying that he feels like he is “in kindergarten” with Mourinho, but has now revealed that the Portuguese was left out purely out of respect for the fact that he is still currently active in the game.

“It’s why in the book I only speak about [former Man Utd boss Sir Alex] Ferguson – because we are not in the job anymore,” the 71-year-old said in an interview with the Daily Mail. “Ferguson was a bad loser, just like me.

“I didn’t want to talk about managers like Mourinho, Jurgen Klopp or Pep Guardiola, who are still in a job.”

Wenger generally cuts a calming figure but admits that his heated battles with the likes of Mourinho left him with regrets regarding his behaviour during his time as a representative of the Gunners.

“But every time I regretted it because I hadn’t behaved as I should and I felt responsibility towards the club for that.

“Sometimes I thought I was provoked or resented the behaviour of someone else. Some games I went in with an aggressive level above what it should be, so it didn’t take much to go overboard.”

Wenger added that he remains open to returning to management should the right role become available and could not resist one final mischievous jibe at his old foe.

“I will return [to England] one day,” he smiled. “Apparently Tottenham have a fantastic new stadium – I’ve been invited by [Spurs chairman] Daniel Levy.”