West Ham fight back to draw three down to stun Spurs 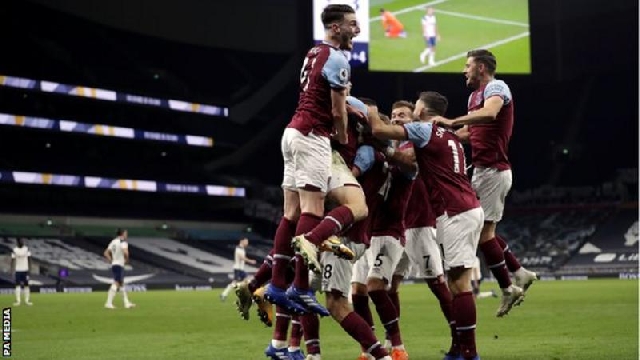 West Ham came back from three goals down with under 10 minutes to go to rescue a point in an astonishing comeback against Tottenham.

Manuel Lanzini’s brilliant long-range strike in injury time levelled the scores after Spurs had taken complete control in the opening 16 minutes through two goals from Harry Kane and one from Son Heung-min.

Gareth Bale, on as a substitute in his first appearance since his return to Spurs from Real Madrid, missed a great chance in stoppage time before Lanzini lashed the ball in off goalkeeper Hugo Lloris’ fingertips to cap an incredible climax.

West Ham improved markedly in the second half, but when Kane hit the post with 12 minutes to go there was no sign that the final result would be anything other than another win for Spurs.

The result sees Spurs remain in sixth place, while West Ham move up two places into eighth.Spurs go from sublime to ridiculous

Spurs looked irresistible in the opening stages, carrying on in the same vein from their 6-1 thrashing of Manchester United at Old Trafford.

Kane’s sublime pass from inside his own half set up Son’s opener after only 45 seconds when the South Korean bent his shot around Balbuena and into the bottom corner.

Son then assisted Kane for the second after just eight minutes, the Spurs skipper’s excellent close control being followed up by a shot lashed past Lukasz Fabianski.

And when Kane then nodded in from a nicely floated cross by Sergio Reguilon, the hosts looked set to move up into second place ahead of the Sunday night Leicester v Aston Villa match.

The impressive Kane was even heavily involved at the other end, making an excellent block to deny Vladimir Coufal’s shot just before half-time.

But Spurs looked to ease off in the second half, and the introduction of Bale with 18 minutes left should have injected some much-needed urgency.

However the Spurs defence, barely tested before the break, creaked and then collapsed when it finally came under pressure at the crunch.Hammers dig deep

Faced by a daunting scoreline before a quarter of the game had gone, West Ham dug deep and didn’t collapse completely as might have been expected after Spurs’ opening onslaught.

But when Pablo Fornals somehow headed over from two yards out with keeper Lloris not in the picture, it seemed to suggest that David Moyes’ side would leave north London empty-handed.

But Moyes, back in the technical zone after a spell away with coronavirus, then saw his side go onto the front foot even after the introduction of Bale suggested that Spurs were closing in for the kill.

Balbuena’s goal jangled the hosts’ nerves, and when Sanchez diverted Coufal’s cross into his own net it was the away side who scented blood.

Lanzini’s brilliant shot, his first goal since May 2019, gave West Ham a draw that sees them putting a poor start to the season behind them with seven points from their last three Premier League outings.