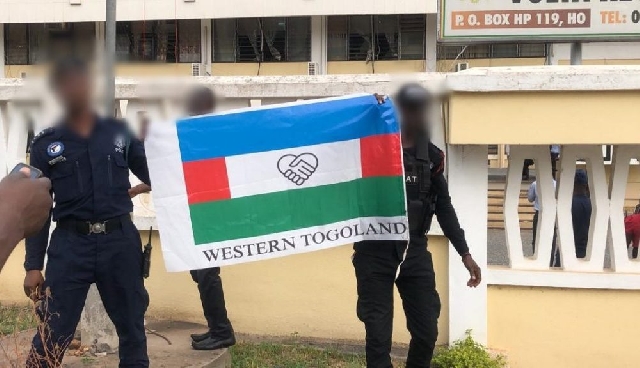 Three policemen have been abducted by Western Togolanders in the early hours of Friday, 25 September 2020 when the secessionist group blocked major entries into the South Tongu Constituency of the Volta Region.

A member of the group, who spoke to Class News, said they abducted the police officers for shooting at them and injuring three of their members who had massed up to demonstrate for their independence.

The police are still in their custody.

Meanwhile, 25 of the Togolanders were also arrested by the police and military.

The group, which wants the Volta region to be an autonomous country, mounted the blockades on Friday dawn at Tefle Junction and Bakpa-Tademe.

Explaining the incidence to Class News’ Albert Kuzor, District Chief Executive (DCE) for South Tongu constituency, Mr Louis Agama said: “Just this dawn, we had a call that a group calling themselves Western Togolanders came into my district. I learned they’re from Battor Area. Some youth mobilised themselves, about 100 of them. They were here, they blocked the roads with lorry tyres and wood logs. We had to call in the security men, the navy from Agortah to come and restore the situation on the ground”.

“From the 2IC [Second In Command] that led the men to the ground, when they came, they gave several warning shots for them to disperse but they were adamant to move.

“This prompted them to fire shots into the crowd, wounding three of them who are currently receiving medical attention.

“So, the situation now, the vehicular movement is under control now, cars are moving freely on the road”, he said.

The DCE, however, noted that since this is a security issue, DISEC [District Security Council] will meet to discuss the way forward.

Referring to the arrest and detention of some members of the group, Mr Agama called on the secessionists to cease fire to enable unity to prevail.

“For us in government, we want unity as a nation, we don’t want any part of the country to be taken off from Ghana.

“We need to understand that, as a nation, without unity, we cannot move.

“So, I’m appealing to the group to cease its activities and unite and move forward for better development of the region and the country as a whole”, he said.