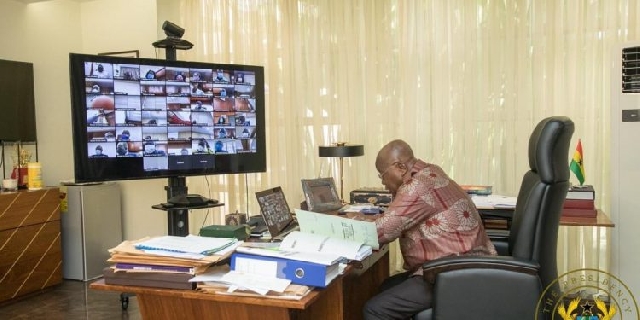 President Nana Akufo-Addo, on Tuesday, 14 July 2020, chaired the 80th Cabinet meeting via Zoom from the Presidential Villa where he is under a self-imposed 14-day isolation over COVID-19 fears.

At the start of the meeting, the President said: “Members of the Cabinet, this is, I think, the first of such meeting in the history of our government”.

“So, we are all part of the historic process”, he added.

“If I look at the Secretary to the Cabinet, I hope it is going to be a successful venture”, the President said.

The is the second virtual meeting the President has held from the villa.

The first one was with the communication team of the governing New Patriotic Party.

At that Sunday, 12 July 2020 meeting, the President urged the communicators to remind Ghanaians of his government’s achievements in the past three-and-a-half years, as the country goes into another general election.

The President said: “We need to set before the Ghanaian people clearly, the situation we inherited on the 7 of January 2017”.

“It is critical”, the President stressed, “because without that reference, it is difficult to measure the quality of the achievement”.

“You have the records: dumsor, high rate of inflation, low rates of growth, widespread unemployment, a certain level of demoralisation in the country; and within three years, this very bleak economic narrative has been transformed”, he reminded the communicators.

President Akufo-Addo also urged the team to drum home the government’s fight against the COVID-19 pandemic.

“I think there is a need to continue stressing the need for respecting the COVID-19 protocols. We are in government and it is very important that, that aspect of our concern about the need for our people to be safe comes out positively in everything we say. People have to take the protocols seriously.”

Ahead of the President’s virtual meeting, the Campaign team had issued a statement urging the communicators to focus on the government’s records.

The statement, signed by Dr Mustapha Abdul-Hamid, Deputy Manager of the NPP’s 2020 Campaign Team, said: “The President of the Republic of Ghana and presidential candidate of the NPP and the 2020 campaign team, wish to remind its faithful that the party’s philosophy of positive engagement still holds valid”.

“We, therefore, urge all who speak for, or purport to speak for the party, to refrain from attacking political opponents. We specifically ask that no reference should ever be made to opponents’ ethnicity, religion or gender”.

“We shall campaign on our record and win. Indeed, there is enough to speak about with regard to our record. We cannot beat our opponents in the politics of calumny. Let us, therefore, refrain”.