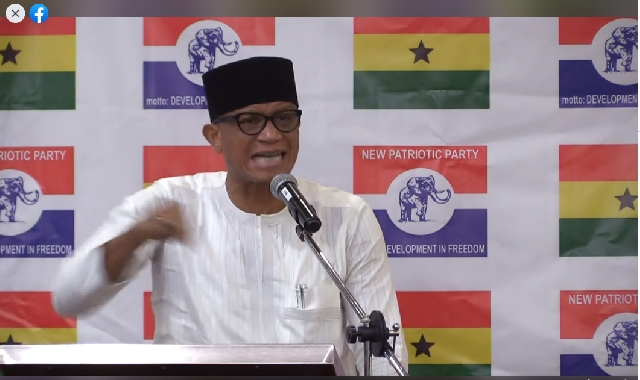 The governing New Patriotic Party (NPP) has wondered what can be more “sakawa” than a President signing off 75 per cent of Ghana’s bauxite concession to his brother just three weeks after losing the 2016 general elections.

At a press conference in Accra on Monday, 7 September 2020, the Minister of Zongo and Innercity Development, Dr Mustapha Abdul-Hamid described it as “stealing”.

In the view of the NPP’s Deputy National Campaign Manager, that particular behaviour of the flagbearer of the National Democratic Congress (NDC) better fits the ‘sakawa’ description than his endorsement, on his Facebook timeline, of that description of President Nana Akufo-Addo and some people serving in his government.

Mr Mahama shared on social media, a statement authored by opposition MP Isaac Adongo, in connection with controversial Agyapa Royalties deal, in which he described the President and some government officials as ‘Akyem Sakawa people’.

“Even that one, nobody has said that it constitutes sakawa.

“That is basically stealing Ghana’s resources by dead of night because you have lost, you are on your way out.

“Somebody comes in, like Akufo-Addo and we go to the Supreme Court and we retrieve these resources, we leverage it with the sinohydro deal and that is what is giving the people of Tamale the interchange, that is what is building all these eastern corridor roads, the innercity roads in Cape Coast, etc.

“So, you that you steal our resources and give it to your brother, somebody comes and takes that resource and is leveraging it for the benefit of the Ghanaian people, you and that person, who qualifies to be called sakawa?” Dr Abdul-Hamid asked.

“So, really and truly, I think that we should call a spade by its name”, Dr Abdul-Hamid said.

At a meeting with the Ghana Catholic Bishops’ Conference at the Jubilee House on Friday, 4 August 2020, President Nana Akufo-Addo not only said he was “very disturbed” by the ethnocentric tagging of his ethnic group but also noted that “that is the kind of language we don’t want in our politics.”

“Sometimes, one would hope when things come out, people will comment on them. The comment made by my opponent: ‘Akyem Sakawa’ people, I have not heard any public figure in this country or anybody comment on it.”

“If I was to get up to make a comment about northerners or Gonjas, you can imagine the uproar that will be in the country,” the President bemoaned.

Responding to President Akufo-Addo’s complaint, Mr Mahama said his successor has no right to complain about the ‘Akyem Mafia’ and ‘Sakawa Boys’ tags used to describe some of his “friends and family members” serving in his government, who are behind the “shady” and “untidy” Agyapa Royalties deal.

He told Eric Ahianyo in an interview on TV XYZ on Saturday, 5 September 2020 that: “In any case”, Mr Mahama noted, “President Nana Akufo-Addo has lost the right to complain a long time ago”.

The former President explained: “He [President Akufo-Addo] was an opposition leader who called Presidents before him anything you can imagine, including ‘Prof Do Little’ and then he described somebody as a ‘Simpa Panyin’ and I don’t want to repeat the others things he said”.

Mr Mahama continued: “He’s the President who has called his critics naysayers and Jeremiahs”, adding: “I don’t understand on what standard he can be offended at this time because he has precedence of name-calling”.

Speaking about the President’s angry disposition with which he made the complaint to the Catholic Bishops, Mr Mahama said: “I think that temperament in leadership is very important and there are many things a president should attend to and you must not appear, in public, to have lost your cool”.

“He seemed very angry, that’s true, but I think he should maintain his temperament to come across as a good leader”, Mr Mahama advised.

Mr Mahama said although he shared the statement in his Facebook timeline, “I’ll be the last person to disparage any tribe or ethnic group”.

“In the first place, the National Chairman of my party, Mr Samuel Ofosu-Ampofo, NDC, is an Akyem and so are many leading members of my party and members and supporters and when I was President, I appointed many Akyems in my government”.

“The head of our Manifesto Drafting Committee, Prof Danso Barfuor, is an Akyem and they have all contributed to our government and our forward march to recapture power in the December elections in order that we can create jobs, spread development in an equitable manner throughout the country”, Mr Mahama pointed out.

He said: “Everybody knows me since I’ve been in politics and I’ll be the last to express any ethnic sentiments”.

“OK, remember that on two occasions in the recent past, I had called for a debate with President Akufo-Addo. He’s not found it worthy to respond to that call. I can understand President Akufo-Addo’s frustration, desperation and deliberate attempt to whip up ethnic sentiments in this particular case but I don’t think it will wash”, Mr Mahama said.

“I’ve advocated a campaign of issues and that is what I’m focusing on as I engage and interact with people on my tour of this country”, he noted.

Mr Mahama also denied that the Akyem Mafia and Sakawa Boys description was targeted at the President’s ethnic groups.

“It is important for me to point out that no one has described his ethnic group or any other ethnic group in the manner in which the President mounts this complaint.

“What I remember is: I shared a post of one of our very fine and brilliant MPs for Bolgatanga Central, that is Hon, Isaac Adongo, and in that post, Adongo describes certain people in Akufo-Addo’s government, and you know he has a lot of members of his family and friends in his government, so, Isaac Adongo describes those behind a certain shady and untidy deal in the government in a particular manner”, Mr Mahama explained.