With their homes in ashes, residents share harrowing tales of survival after massive wildfires 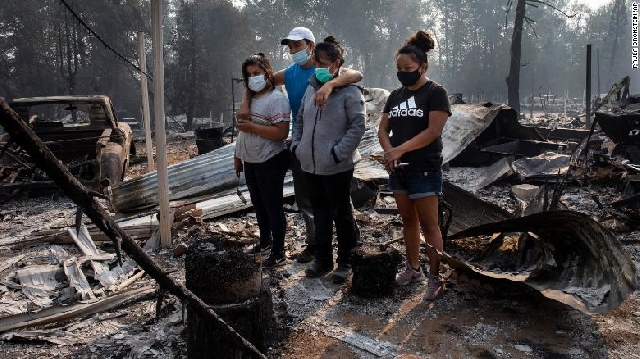 A family looks at the destruction of their home at Coleman Creek Estates mobile home park in Phoenix, Ore., on Thursday.

With some neighborhoods in ashes, residents of Oregon, California and Washington states shared harrowing tales of survival after a series of wildfires left 15 people dead.

Overwhelmed firefighters struggled to contain the massive orange flames as rescue workers searched through communities burned to the ground.

As of Friday morning, they had discovered at least 11 victims in California and a total of four others in Washington state and Oregon.

One of several wildfire raging in the state arrived at her doorstep while she was at work Monday. Her daughter, 6, niece and sister were in her house in Blue River.

As she was rushing home to get them, she got into a wreck, she told CNN affiliate KOMO.

She pleaded with a sheriff deputy to give her a ride home, but they couldn’t make it with the flames.

The blaze was so fiery, it melted the back of her car.

Firefighters from the Junction City Fire and Rescue rushed to her home and got them out. “My kids’ alive, that’s all I care about,” Lemmerz told the affiliate. “I can’t say anything else.

My kid is alive and it was very close.” In Oregon, numerous wildfires have killed at least three people and nearly wiped out the southern cities of Phoenix and Talent.

About a half million people have fled their homes in Oregon — more than 10% of the state’s population. And that number is expected to grow.

Thirty-seven wildfires remain active in the state — down from nearly 50 earlier this week.

The blazes have scorched about 900,000 acres across the state, the Oregon governor’s office said.

The scope is unprecedented. For the past ten years, the state has seen an average of 500,000 acres burned each year.

Adding to the grim outlook, Wheeler’s emergency order says the city has limited firefighting resources because some have been deployed to assist in other parts of the state.