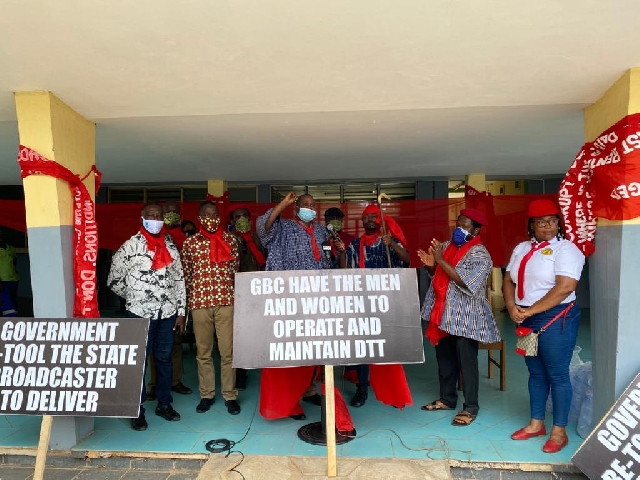 Staff of the Ghana Broadcasting Corporation (GBC) are outraged over a directive from the Communication Ministry for the state broadcaster to reduce its channels from six to three.

A letter signed by the Sector Minister Ursula Owusu-Ekuful said due to the congested nature of the DTT platform, GBC needs to consolidate its channels into 3 in order to free some space on the spectrum.

This has resulted in a heated public debate with a section of the public accusing government of seeking to free up space for some pro-NPP media houses.

Management of GBC also petitioned the National Media Commission (NMC) to intervene in the matter.

The Accra Local Union of the Public Sector Workers Union (PSWU) summoned all staff of GBC to an emergency meeting on the issue on Friday July 17.

The Divisional and Local Union Chairman for GBC, Mr Sam Nat Kevor at a staff durbar asked the NMC to protect the interests of Ghanaians and exercise their constitutional mandate and save the soul of Ghana.

He also urged the agitating workers to remain calm and go about their duties while they appeal to the National Media Commission to reverse the decision.

Mr Nat Kevor said “We are believing that these moves are subtle moves to privatize the Ghana Broadcasting cooperation, after several attempts over the years”

He also added that “If you claim that the DTT platform is full, and you want to create a redundancy, what do you do, infrastructure can be expanded to have more spectrum to occupy it”

The angry staff clad in red arm bands mounted placards which reads, “government retool the state broadcaster to deliver, GBC has the men and women to operate and maintain DTT’’

“Nana save GBC we are doing our best, GBC is fully funded by the state and should be operated by the GBC for the state.