Wolves put three past Everton to climb back into top six 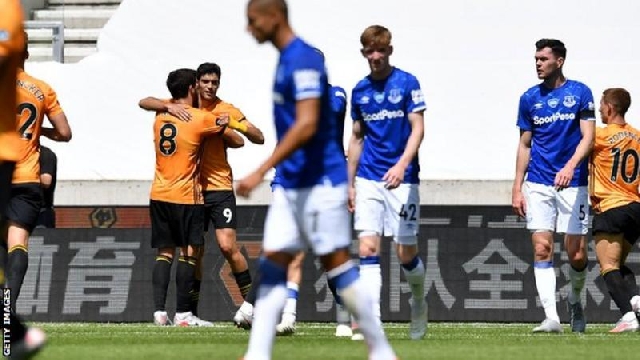 Wolves boosted their chances of claiming a place in next season’s Champions League with a comprehensive home victory over Everton.

Wanderers bounced back from consecutive defeats with a victory through goals either side of half-time and a game-sealing third from Diogo Jota with 15 minutes to go.

Leander Dendoncker headed in the second just a minute after the restart before Jota lashed in from just inside the box to put the game beyond the visitors.

It moves Wolves back up to sixth in the table, three points behind Manchester United in fifth – a position that could be good enough to earn a place in Europe’s top club competition next season.

Everton committed so much of their efforts to keeping the home side at bay and as a result offered little at the other end of the pitch, with Dominic Calvert-Lewin and Richarlison given scraps to feed off at best.

The closest they came to a goal was a Digne angled drive that flashed past the far post in the second half.

The defeat leaves the Toffees 11th and surely ends their hopes of securing a Europa League spot for 2020-21.

And there was more bad news for manager Carlo Ancelotti, who was already without Mason Holgate and saw fellow centre-back Yerry Mina limp off in the first half with what appeared to be a thigh injury.Wolves return to winning ways in style

Wolves returned to action in June in fine form, winning their first three games without conceding a goal to increase hope that a late dart for a Champions League place was on.

But early July checked that optimism, courtesy of successive defeats without scoring against Arsenal and Sheffield United – opponents who are also in the mix for a place in the top five.

This, then, was a necessary victory, resulting from very timely goals.

Podence had already tested Jordan Pickford twice with low angled drives inside the box before he used his trickery to good effect to turn and draw a mistimed challenge from Digne.

Jimenez was coolness personified from the spot, meaning he has now been involved in 35 Premier League goals this season (goals and assists combined). Only Liverpool’s Mohamed Salah, with the same number, can match him.

Dendoncker’s headed goal was the real killer, coming so early in the second half from Pedro Neto’s well-delivered free-kick.

Adama Traore came on for the last 19 minutes and should have added to the scoreline but instead planted an effort against the crossbar after he was found unmarked in the box by Jota.Everton lack steel and style

Everton retained some hope of a Europa League place when the Premier League restarted but more than that you sense the final nine games were a chance for Ancelotti to assess which members of his squad have a future at the club.

On this evidence, the Italian has his work cut out.

They possess two superb centre forwards, but without much of a creative midfield behind them the Blues are unable to maximise their most potent weapons.

So little an impact did top-scorer Richarlison have on the game he was withdrawn shortly after the hour mark.

Failing to provide ammunition is not the only failing of the Toffees midfield. It also struggles to provide an adequate shield for the defence – especially one hit by injuries.

Jordan Pickford was too often exposed and had to make three saves to deny Podence a goal his display deserved, although the Everton keeper was fortunate to be able to scramble the last off the line after allowing it to go through his legs.

Having now won just three of their past 32 Premier League away matches against teams in the top half of the table, and suffered 11 top-flight defeats on the road for the first time since 2003-04, the Blues desperately need some grit to complement the guile up front.Wolves hitting their goals under Nuno This was the third time Wolves have won a game by three goals in the Premier League under Nuno Espírito Santo – prior to his reign, they had only won once in the competition by more than two goals (4-0 v Blackpool in February 2011). Everton have only kept one clean sheet in their past 17 away games in the Premier League, conceding at least two goals in 10 of these fixtures. Wolves have now kept a clean sheet in five of their past six Premier League games at Molineux (W3 D2 L1), as many as they had in their previous 18 combined. Wolves striker Raul Jimenez has scored with all six of the penalties he has taken in the Premier League; only Yaya Toure (11), Dimitar Berbatov (nine), Jan Molby (seven) and Rickie Lambert (seven) have a better 100% ratio in the competition. Diogo Jota has scored five goals for Wolves after coming on as a substitute – more than any other Premier League player across all competitions. What next?

Wolves travel to face Burnley at Turf Moor on Wednesday in a 18:00 BST kick-off. Everton host Aston Villa at Goodison Park the next day, also at 18:00.