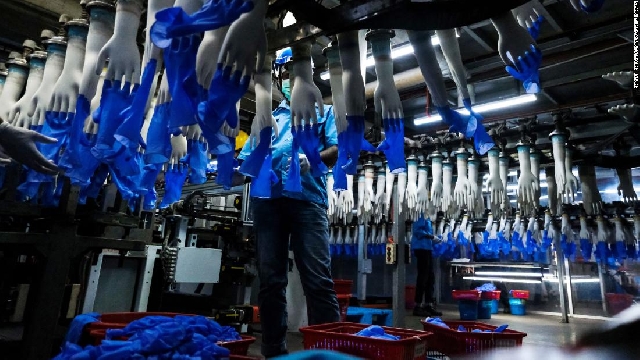 White molds wearing disposable gloves whizz by on a conveyor belt in a promotional video for the world’s biggest glove maker, Top Glove.

“Gloves can keep us out of harm’s way, wherever we may be and whatever we may be doing,” the narrator says, his voice booming over the company’s logo and its motto, “Top quality, top efficiency.”

Demand for disposable gloves — the kind often associated with sterile hospital rooms — has surged during the coronavirus pandemic as health care workers rush to secure the supplies they need to treat the disease and protect themselves.

The Malaysia-based Top Glove and its local rivals have benefited enormously from that need: Some 60% of the world’s glove supply comes from Malaysia, according to the Malaysian Rubber Glove Manufacturers Association (MARGMA).

More than a third are exported to the United States, which for months has led the world in coronavirus cases and deaths. But with extra demand comes renewed scrutiny of how these Malaysian companies treat their workers, particularly foreign staff recruited from neighboring countries.

Labor rights activists who spoke to CNN Business said that practices reported by former workers contain elements of forced labor. Some authorities have taken note of such concerns, putting pressure on Top Glove and other manufacturers to ensure their workers are treated well.

In July, for example, the US Customs and Border Protection (CBP) agency barred products made by Top Glove and one of its subsidiaries, TG Medical, from being distributed in the country after finding “reasonable evidence” that the companies were using forced labor, according to an emailed statement.

Top Glove said in August that it was making good progress with authorities to resolve the issues. In a statement, the company said it had started reimbursing the recruitment fees foreign workers paid to agents who the offered them the job.

Top Glove says it expects to repay a total of 53 million Malaysian ringgit ($12.7 million).   A spokeswoman told CNN Friday that upgrades to foreign workers’ accommodation, as requested by US authorities, had been completed.

But labor rights activists say the problems blighting Malaysia’s glove industry aren’t easily fixed. Concerns remain about the treatment of foreign workers in a rapidly growing industry, some of whom are enticed with the promise of high-paying jobs but are left saddled with debt.

In recent decades Malaysia has emerged as a leading supplier of disposable gloves, due to its vast rubber plantations and government support for an industry that generates billions of dollars in sales each year.

Revenue from glove exports is expected to reach 21.8 billion Malaysian ringgit ($5.2 billion) in 2020, according to MARGMA, as Covid-19 drives demand for Malaysian-made gloves up around 30%, from 170 billion to 220 billion pieces.

Market leader Top Glove says it produces around a quarter of the gloves used worldwide in its 46 factories, mostly in Malaysia.

On June 11, the company recorded its best-ever quarterly net profit of 350 million Malaysian ringgit ($84 million), more than four times the figure it brought in during the same quarter last year. The firm said monthly sales orders surged 180% due to the rise in demand for rubber gloves during the coronavirus pandemic.

Since the beginning of the year, Top Glove’s share price has rocketed fivefold on the Bursa Malaysia. Top Glove founder Lim Wee Chai was worth $2.5 billion in June, according to Bloomberg calculations that excluded the value of his pledged shares in the company.

Behind Top Glove, other large Malaysian players include Hartalega and Kossan. Together, the three companies employ nearly 34,000 workers. Most of them have been hired from abroad, with a majority coming from Indonesia, Bangladesh, Nepal and Myanmar, according to several experts interviewed by CNN Business.

“Most Malaysian workers don’t want to do the poorly paid, hard and dangerous work offered in these factories,” said Bent Gehrt, from the Workers’ Rights Consortium, a labor rights NGO based in Washington D.C.

To hire foreign laborers, Malaysian rubber glove companies rely on recruitment agencies and subagents in the workers’ home countries, with whom they sign contracts containing hiring targets, sometimes through another layer of intermediary agencies located in Malaysia, according to Andy Hall, a labor rights activist.

These intermediaries get paid little or nothing by employers for their services and so they charge the workers large sums to secure them passports, work visas, security clearance, medical exams and flights, he said.

Former Top Glove employee Taha, whose name has been changed to protect his identity, said he was charged 165,000 Nepali rupees ($1,390) by an agent who came looking for workers in his Nepali village in 2013.

“I had to take out a loan with a very high interest rate to pay for this fee,” said the 27-year-old worker. Seven years later he still hasn’t repaid all of it, he said.

His recruitment agency, Trust Nepal, told CNN Business that prior to January 2015 workers had to pay for their flights and passport-related costs. But the company said it had never collected such a large sum from a single worker.

Taha says he paid some of the money to the subagent who came to recruit him in his village.   Experts interviewed by CNN Business said these practices contain elements of forced labor as defined by the International Labour Organization such as abuse of vulnerability, deception in recruitment, payment of recruitment fees and abusive working conditions.

Top Glove, Hartalega and Kossan say they’ve taken measures to prevent the exploitation of workers by recruiters. In recent years, all three companies have introduced “zero-cost recruitment” policies, meaning the agencies in the workers’ home countries are not allowed to charge them fees related to their employment — the companies cover all their costs.

Top Glove records statements from workers in their home country and upon arrival in Malaysia to make sure they are not asked to pay fees, said a spokeswoman.

Hartalega workers are briefed about the company’s zero-cost recruitment policy before they leave home and are asked upon arrival if they’ve had to pay anything.

The same question is asked three months into the job, the company said.

In its annual report, Kossan also said that it interviews employees multiple times before and after their arrival in Malaysia to determine if they’ve paid recruitment fees.

If they have, they’re refunded. “[We] will not hesitate to sever ties with unscrupulous agencies that exploit our workers,” the report added.