Yendi to get a military airstrip – Bawumia 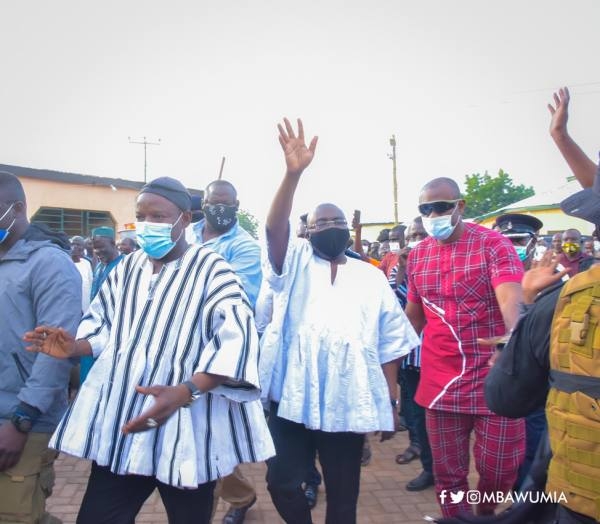 The Yendi Municipality of the Northern Region could soon boast of a military airstrip in the second term of President Nana Addo Dankwa Akufo-Addo’s administration.

Vice President Dr Mahamudu Bawumia who made this known during a courtesy call on Ya-Na Abukari II underscored the significance of the facility to residents and security agencies.

“The Akufo-Addo government intends to build a military airstrip here in Yendi. You will soon see military planes taking off and landing here in Yendi which will also facilitate in speedy travels during very essential occasions”, he revealed.

Feasibility studies for ten (10) new airports, airstrips and helipads are expected to be completed in the country by the country government according to checks at the aviation ministry.

The total cost for the feasibility studies, to be undertaken by the Aviation Ministry, for the ten aerodromes and seven (7) other projects is GHC 24.7 million, the Report of the Committee on Roads and Transport on the Annual Budget Estimate of the Ministry of Aviation for 2020 Financial Year has revealed.

There is currently a military airport in Takoradi which is used by domestic airlines for scheduled passenger operations.

However, the limited use of the facility by airlines, and the growing demand on the Accra-Takoradi route as well as the need to provide easy access to the tourism hub of the country–Cape Coast, has meant there is the need to construct a bigger civilian airport.

“We have a lot of tourists going to the Cape Coast area, there is a lot of development going on in the oil and gas enclave in the Western Region, and the Takoradi Port is there as well. The fishing harbour in Elmina is also there. All these show that people will be travelling to and from the Central and Western Regions, so we plan to move on that,” Aviation Minister, Joseph Kofi Adda recently revealed

The Ho Airport, on the other hand, is currently used as a pilot training base by some airlines.

The airport has a runaway of 1,900 metres in length and 30 metres wide, an aircraft parking area, a terminal building that can hold at least 150,000 passengers a year, a VIP and VVIP facility, a parking area for the staff and nine- Kilometre network of roads around the airport.

Regional and domestic airline operator, Africa World Airlines (AWA) has indicated that it is willing to start servicing the airport to boost tourism and investment in the Volta Region.

The Sunyani Airport has been out of use for some time now due to defects on the runway of the facility. The Aviation Ministry, working with the airport operator, Ghana Airports Company Limited (GACL), are currently overseeing a rehabilitation of the runway to make it possible for airlines to service the airport.

The terminal building of the facility has, however, been expanded to accommodate modern x-ray security screening equipment.