‘You played ‘sakawa’ games with customers when you could’ve paid them all this while; how about the dead?’ 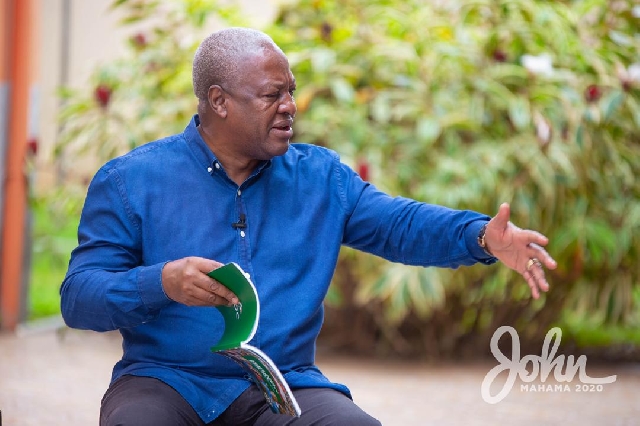 The flagbearer of the National Democratic Congress (NDC), Mr John Dramani Mahama, has questioned the Akufo-Addo government’s U-turn on the payment of customers of collapsed banks and other financial institutions.

Following the collapse of those financial institutions in 2018, the government insisted on issuing five-year bonds to repay a substantial part of the locked-up savings of customers.

That arrangement did not go down well with Mr Mahama, who promised to repay all customers of the collapsed financial institutions if elected as president in the December 7 elections.

Subsequent to Mr Mahama’s promise, the government backed down from its five-year bond repayment plan and announced its readiness to pay cash ahead of the impending elections.https://www.facebook.com/plugins/video.php?href=https%3A%2F%2Fwww.facebook.com%2FJDMahama%2Fvideos%2F342530310426084%2F&show_text=false&width=734&height=413&appId

Addressing separate rallies in Tuobodom, Krobo, Aworowa and Techiman, all in the Bono East Region over the weekend, Mr Mahama wondered why it took the government that long to make a decision on easing the hardship of customers of collapsed financial institutions.

He noted that many of the customers have been hit hard while some have become bed-ridden and others have lost their lives because of the government’s refusal to pay their locked up savings.

“We said in our manifesto that we are going to fully pay these customers, then just recently, the government told us that they have changed their mind and will fully pay the customers.

“So, all this while, the government had the financial muscle to pay these customers and they were playing sakawa game with them that they will pay them after five years.

“Okay, pay them but what about those who are dead because of the agony they went through over their locked-up capital? Will the government raise them from the dead and pay them and those who are sick and bedridden?”, he quizzed.

Mr Mahama was, however, not surprised about the government’s U-turn, noting that the Akufo-Addo government had always employed lies and deception, as part of its governance strategy.

He said the time has come for Ghanaians to make a change by voting for the NDC on December 7, to return his party to power and help create prosperity for all, and not a privileged few.

Recently, members of the Coalition of Affected Savings and Loans Customers confirmed to Class Business that some of them received the full payment of their locked-up deposits in cash while some are yet to get theirs as promised by the government.

According to the Chairman of the affected customers, Mr Kofi Sarpong, the majority of their members who could not receive their money had some infractions on their payment claims, hence the delay and difficulty in paying them.

Thousands of depositors on Wednesday, 16 September 2020 trooped to the various branches of Consolidated Bank Ghana (GCB), across the country, to receive their outstanding claims in cash.

This was after the government released some GHS3.56 billion to the Receiver to facilitate the payment.

Speaking to Class Business’ Pious Kojo Backah, Mr Sarpong said: “Some [of our members] have been paid and some have not been paid”.

“Those who have not been paid, the majority of them are having one or two challenges and then some have also been paid but they’ve not received the message simply because sometimes, some of them, their phone numbers are wrong, the information they gave to the receiver is inaccurate”.

“And to be honest the Receiver has set offices across the country where you can go and do the verification.

“When you get there and they check their system and you’ve been paid, they’ll give you CBG account number and then you go and withdraw your money…

“But unfortunately, we have some members, they’ve filled the forms alright, they even have copies of their form but yet their names are not on the receiver’s system.

Such people, Mr Sarpong noted, “can call CBG or the Receiver’s call service number or they can visit their office and they will do their best to go through their files if they can find copies.”

He, however, said there are some customers who have not been paid anything at all because they are awaiting verification.