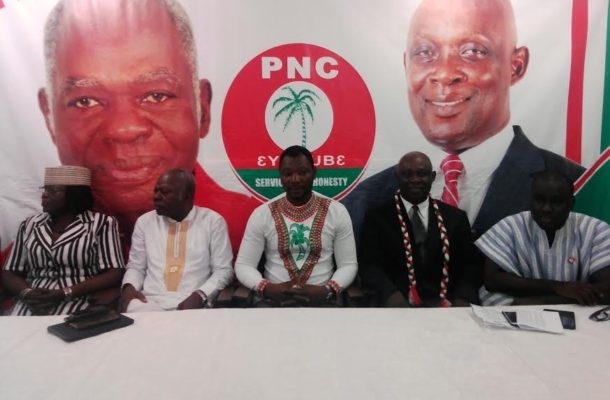 A flagbearer hopeful of the People’s National Congress (PNC), Rev Samuel Adjei-Debrah, has rejected the 26 September 2020 date set by the party’s Council of Elders, as proposed by the five-time flagbearer of the party, Dr Edward Mahama, for their upcoming congress.

This impasse forced the three flagbearer hopefuls of the party, David Apasara, Rev Samuel Adjei-Debrah and Samson Asaki Awingobit, to petition the Council of Elders to intervene to ensure a “formidable and unified” front for the party, as it goes into the December 7 polls this year.

The Council of Elders, in response, agreed to settle the impasse and at an emergency meeting held in Accra on Saturday, 22 August 2020, resolved that “nominations shall remain open at all regions of the country for all aspirants who are contesting for positions of the party till 31st of August 2020.”

It added that the party will hold its National Congress on Saturday, 26 September 2020.

Reacting to this development in an interview on 12Live on Class91.3FM on Tuesday, 25 August 2020, Rev Adjei-Debrah said the Council of Elders has no right to change the 19 September date set by the National Executive Council (NEC).

He said: “19th September was fixed by NEC not Bernard Monah but we [flagbearer hopefuls] met because of certain rumours and we called all people and appealed to the Council of Elders that they should bring all of us to order so that we go to the elections peacefully and come out united not divided that is why we sent the petition so that we can go to the congress on 19th September peacefully.

“I don’t think the Council of Elders has any right to change the date to 26th September because no one has the right to reverse the NEC decision, it is only congress, unless we go to congress…”

The youth wing of the party has also rejected the date set by the Council of Elders.

It says they only recognise the earlier statement signed by the National Chairman of the party announcing September 19 as the date for the Congress.

National Youth Organiser of the PNC, Awudu Ishaq told Class News the Council of Elders, by their intervention, is attempting to usurp the powers of the national chairman, a situation which, according to him, could affect the fortunes of the party.

He said: “So, as far as the youth of the party are concerned, congress is scheduled for the 19th and not the 22nd. We do not recognise any other communication apart from that issued and has the signature of the national chairman….26th September cannot be in the best interest of the party because if you look at the electoral calendar of the Electoral Commission, we must hold congress latest by that 19th date to ensure that the party organises very well and fall in line with that particular electoral calendar of the electoral commission.

“The people who have been constituted into the Council of Elders are very respectable personalities within the party but on this particular matter, I think they want to usurp the powers of NEC in order to please Dr Edward Mahama.”