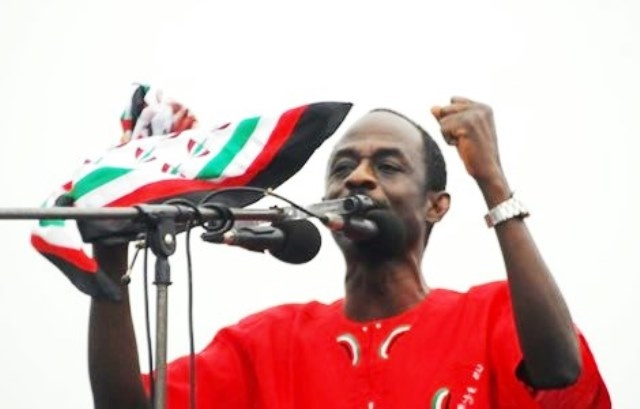 Speaking to party supporters in the region, Mr Nketia said: “… As far as I’m concerned, what is being hyped as the Western Togoland issue is a 100 per cent NPP orchestration”.

“Not 90, not 95, not 98 but 100 per cent NPP orchestration because NPP will want to do everything to make sure that you don’t participate fully in the December elections”, he claimed.

According to him, the invasion of the military in the area during the voter registration exercise, was part of that plan.

“… They deployed the military here and told the rest of Ghanaians that they were fighting COVID.

“When the military came here, I came around myself. Did you see the military fighting COVID, or fighting prospective registrants? Are people from the Volta Region COVID people?” he asked.

“So, we all saw what happened. Now, if they had come here to fight COVID at the Ghana-Togo border, what were they doing terrorising the Voltarians in Banda? If Banda anywhere near Togo?” he questioned.

Mr Asiedu Nketia, thus, urged the people of the region to be vigilant during the 7 December polls.

“So, let us open our eyes. These are people with an agenda that they will never and I say never, allow the full participation of Voltarians in this election and we have seen enough of that to be convinced that they are hell-bent on implementing that agenda”, he warned.

“What they are doing with the Western Togoland issue is to find some small grievances of a few people and hype them and use it as a decoy to create problems for the region in the December elections.

“Their game plan is simple: they send people to the bushes to go and train and they themselves went to the bushes with cameras to capture these training camps to come and show the international community that Voltarians are training in the bush for subversive activities.

“If they genuinely were chasing subversionists, what happened to the people they arrested? Where are they?” he asked.

He added: “They just wanted to create that first impression in the minds of everybody that there are a significant group of Voltarians who don’t want Volta to be part of Ghana and, so, they will not allow Voltarians to participate in the elections.

“Their simple thinking is that if Voltarians don’t participate in the elections, then they may secure a cheap victory without thinking about the consequences of what they themselves are planting.

“As I stand here, I’m fully aware of military uniforms having been prepared so on December 7, these uniforms will be put on vigilante people to come round Volta Region, in all polling stations to create problems and then they will deploy more military and then Volta Region becomes a battleground from where no election can take place”, Mr Nketia further alleged.

Meanwhile, the leader of secessionist group Homeland Study Group Foundation (HSGF), Mr Charles Kormi Kudzordzi, popularly known as Papavi, has released a video message denying any involvement whatsoever of the group in the recent violence staged by people purporting to be Western Togolanders.

“I trust the security agencies, the armed forces, the police, I trust their leadership and intelligence agencies and I know they are all working very hard to make sure that this matter is dealt with as quickly as possible”, the President said in an interview on Accra-based Hello FM in Kumasi on Wednesday, 30 October 2020.

Also, Minister of Information Kojo Oppong Nkrumah denied claims that the government had a hand in the violence.

He told journalists at a press conference on Sunday, 27 September 2020 that speculations to that effect are “flat-out untruths”.

“We don’t want to believe that there are any political groups behind it.

“here are those who, you have heard, suggest that it appears there are some political groups behind what is going on.

“We don’t even want to go that route,” he said.