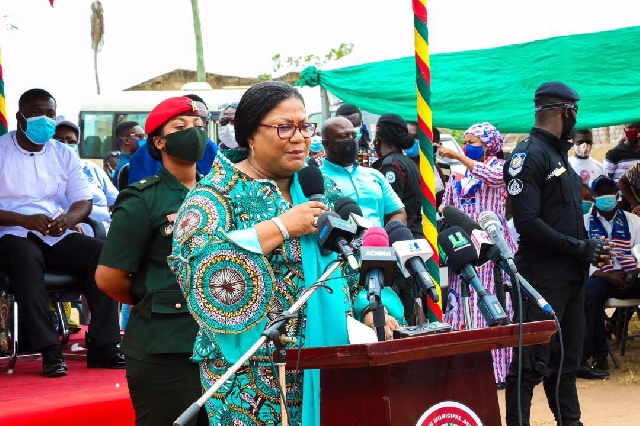 Ghana’s First Lady, Mrs Rebecca Akufo-Addo, has charged Ghanaians to endorse the Akufo-Addo-led administration in the December polls to continue with the massive development it has been embarking upon.

According to her, the only expected change was effected in 2016 and any other change will mean retrogression.

She made the appeal when she visited the three constituencies in Tema to whip up the campaign drive of the NPP.

The First Lady, under the auspices of the Rebecca Foundation, donated medical equipment to the Tema General Hospital.

At a mini-rally in Tema Community Seven, Mrs Akufo-Addo recounted some social intervention initiatives that the New Patriotic Party (NPP) has undertaken such as free SHS, NaBCo, among others.

Touting the NPP’s achievements so far, she said: “We have done a lot and more are yet to come in the next four years”.

“So, I’m pleading with you to look ahead.

“We are moving forward, we won’t retrogress.

“Let no one deceive us to change anything.”

She, therefore, appealed to the electorate to vote for the government to do more to better the lot of Ghanaians.

“The NPP came for change in 2016, so, we are moving on so that he [the president] will continue to work for a better Ghana,” Mrs Akufo-Addo added.

The Tema East Member of Parliament (MPs), Mr Daniel Nii Kwatei Titus-Glover, for his part, said: “God has redeemed Ghanaians from the hands of the John Dramani Mahama government and entrusted it into the care of Nana Akufo-Addo who is transforming Ghana.”

Mr Titus-Glover, on behalf of his other two colleague MPs, seized the opportunity to assure the president of their resolve to work harder to increase the number of votes and keep the three Tema seats for the NPP.