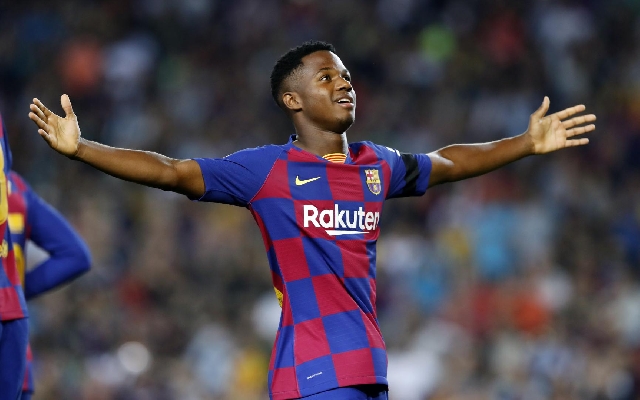 nsu Fati became the youngest player to score for Spain during his country’s 4-0 win over Ukraine in the UEFA Nations League on Sunday.

Aged just 17 years and 311 days, the Barcelona forward broke the 95-year record that was set by Juan Errazquin — who scored his first international goal aged 18 years and 344 days.

Fati made history by firing in his team’s third goal of the game, topping off a sensational display from the youngster which started with winning a penalty in the opening minutes.

“Even though I know him [Fati] well and what he’s capable of, I can’t say I’m not surprised,” Spain manager Luis Enrique told reporters after the game.

“He showed such bravery and daring to do what he did in the second minute, beating a player so naturally. I can’t remember him doing anything like this before.”

The forward — who became Barcelona’s youngest scorer in La Liga and is also the youngest player to ever score in the Champions League — was a constant thorn in Ukraine’s side with his direct runs and trickery.