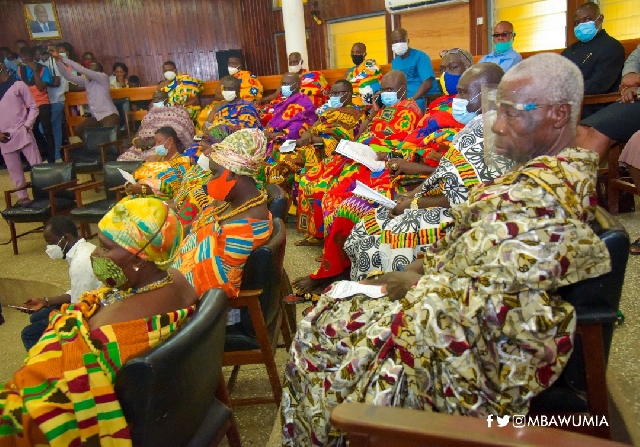 Some of the chiefs of the Western Region

Following the creation of the new Western North Region, the former Western Region House of Chiefs was dissolved on Tuesday, September 15, 2020, after it held its final meeting, and a new one, comprising only traditional authorities in the Western Region was inaugurated by Dr Bawumia.

Traditional authorities whose jurisdiction fall within the newly created region will be under the Western North Regional House of Chiefs, which will be inaugurated by President Akufo-Addo later this month.

Addressing the Chiefs after their inauguration, Vice President Bawumia said, despite controversies that the Chieftaincy institution has gone through in some areas, the relavance and contribution of Chieftaincy to the development of the country cannot be underestimated.

“Nananom, the chieftaincy institution, like various other institutions of state, has lived through controversial periods of our history, playing different

The Vice President noted that some people often raise criticism about the relevance of chieftaincy, but he maintained that the institution is indispensable.

“I do not hesitate to state that chieftaincy has, and will be an indispensable part of our history and development.

“It is so widely respected that even when our fellow Ghanaians leave our shores and are free of the influence of chieftaincy, they create chiefs wherever they are,” Dr Bawumia stated.

Vice President Bawumia stressed President Akufo-Addo’s belief in the chieftaincy institution as an integral part of the nation’s development process, especially in our democratic dispensation.

He also listed a number of things the Akufo-Addo government has done, since assuming office in 2017, which he said affirms the government’s belief and support of the Chieftaincy institution.

“Government recognises that, in order to ensure the success of the programme of social and economic transformation that was put before the Ghanaian people, we have to do a lot. It is important that we bring the traditional role of our Chiefs into the modern, constitutional set up, under which we govern our country,” Dr. Bawumia emphasised.

“As a start, we made a pledge, in the NPP’s 2016 Manifesto, to increase the monthly allowances paid to Chiefs, and the quarterly budgetary support to the Traditional Councils and Houses of Chiefs. This we have done by a hundred per cent (100%).”

“Government has also assisted the National House of Chiefs with three million, five hundred thousand cedis (GHS3.5 million) for the completion of its new headquarters office complex in Kumasi.

“Government is also committed to assisting the National House of Chiefs to moving speedily on finishing work on the codification of the traditional norms and rules that have guided our communities throughout the ages.”

“The Chieftaincy Ministry has also instituted a programme to have courses in Chieftaincy development, comprising lectures, seminars and other activities, aimed at building the capacity of Chiefs and all persons with interests in the Chieftaincy institution. I applaud this initiative.”

As the Vice President enumerated a number strides the government has made in the Chieftaincy sector, he also bemoaned the many Chieftaincy disputes in the country, which, he said is “unfortunately one of the major setbacks to our nation’s socio-economic development.”