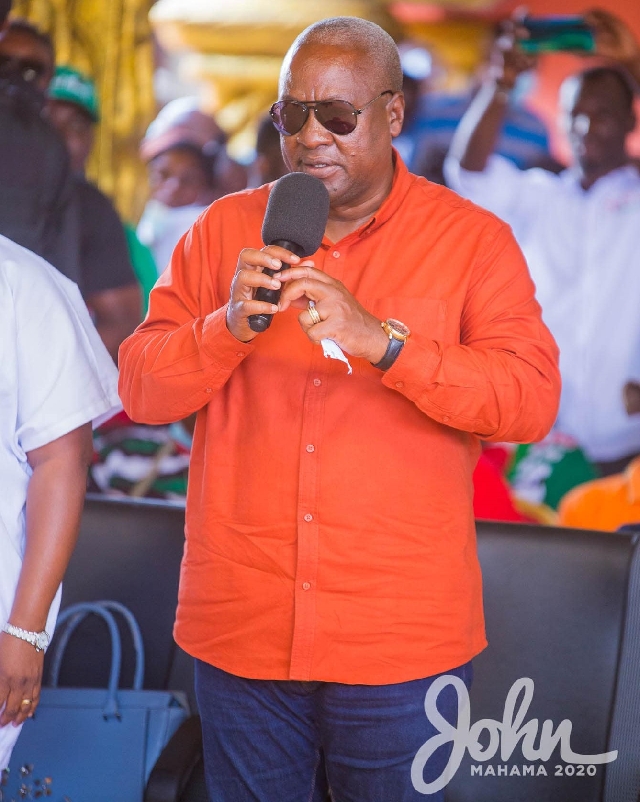 The Presidential Candidate of the National Democratic Congress (NDC), John Dramani Mahama has asked electorate to save Ghana by kicking out “the corrupt government of President Akufo-Addo”.

According to Mr Mahama, if Ghanaians re-elect President Akufo-Addo in the December 2020 general elecions, the country will be heading for doom.

Addressing NDC supporters at Jamboi in the Kpandai Constituency on Friday, 27 November 2020 as part of his campaign tour of the Northern Region, the former president said that the incumbent who trumpeted his resolve to fight corruption before he assumed office,  has rather become a “protector and defender of his corrupt appointees”, largely comprising his family members and friends.

“There are some politicians who believe that, it is the power that is important and whatever you do or say to get it, doesn’t matter.

“Look at promises like One District One Factory, one million dollars per constituency every year and One Village One Dam, among others. So, you should achieve something before you ask for four more but, in this case, it is four more to do what?” Mr Mahama questioned.

Mahama said President Akufo-Addo’s abysmal performance in office, coupled with the unprecedented level of corruption that he superintends and his non-commitment to the fight against corruption are enough grounds for electorates to kick out the government in the 7 December 2020 general elections.

“It is important that Ghanaians show them a red card on 7 December 2020 and bring back the NDC to create prosperity for all Ghanaians, not a few privileged members of the President’s family and friends.”

Mahama was also concerned about how the Akufo-Addo government has taken yam farmers for granted and literally collapsed the yam market, adding the next NDC government will revive the yam market again by ensuring that farmers get decent incomes from their sweat and toil.

He said in order to modernise the agriculture sector, the next NDC government would establish Agricultural Mechanisation Centres in districts across the country to ease the burden of farmers and also make agriculture more attractive to the youth.

These centres, Mahama explained, would be stocked with agricultural machinery such as tractors, ploughs, planters and combine harvesters, among others, to enable farmers access such services to boost food production in the country.