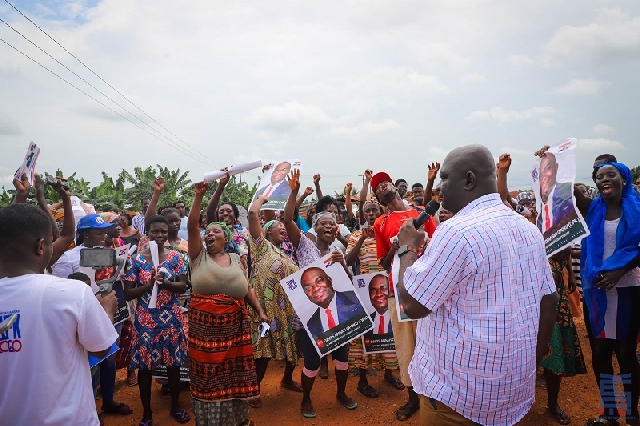 Some of the cocoa farmers at the NPP campaign

Cocoa farmers in the Mpraeso constituency have touted the government’s efforts and investments in improving their living conditions as the best so far.

According to the farmers, the Akufo-Addo-led government has progressively shown commitment to improving the conditions of farmers and boosting the growth of the agriculture sector.

The farmers made this known when the parliamentary candidate of the New Patriotic Party (NPP) for the area, Mr Davis Opoku Ansah, popularly called OPK, and other party leaders, visited them in Adontenkrom.

Mr Opoku reiterated the government’s interventions in the cocoa sector.

He mentioned initiatives such as the Living Income Differential (LID), which ensured farmers received an extra $400 income on every tonne of cocoa they produced.

He also touched on the free cutting and replacing of diseased cocoa trees.

This, he said includes free farm labour for two years and compensation for farmers who had the swollen shoot virus disease on their farms.

“The government has introduced nationwide hand-pollination, which has tripled yields for beneficiary farmers,” the aspiring legislature stated, adding that the “introduction of the nationwide mass pruning of cocoa trees to massively boost yields” has “curtailed the spread of diseases and protected the environment”.

He said the government ensured a timely supply of adequate fertilisers.

Additionally, he said the number of extension officers have tripled through the employment and training of over 1,300 youth within cocoa-growing areas to provide extension services to farmers.

The NPP’s Mpraeso parliamentary candidate urged them to keep their hopes in the President Akufo-Addo-led government to do more for them.