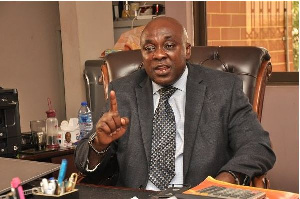 Social media platforms have been inundated with reactions to Carlos Kingsley Ahenkorah’s resignation from office as Deputy Minister of Trade and Industry.

Mr. Ahenkorah resigned, Friday, after he admitted in an interview that he visited some voters registration centres in his constituency despite knowing he has tested positive for Coronavirus.

Although some held the view that he should have been in isolation because his action is against the preventive protocols, Ahenkorah who is also a Member of Parliament argued that he was careful when he stepped out.

“I drove in my car and got there, got down, and spoke far away with the EC officer who explained the issue to me. I told her I will report this to their boss and then I just left. I was very careful. It is important for people like us to know their status because whether you like it not, we will go into the midst of people,” he told the media.

Ahenkorah fell on the dagger of a section of the public with his defense. His response was described as repugnant as some called for his dismissal.

Amidst reports he had been given an ultimatum by President Akufo-Addo to resign or be sacked, the minister opted for the former as the Presidency announced his resignation.

“The President of the Republic, Nana Addo Dankwa Akufo-Addo, on Friday, 3rd July, 2020, accepted the resignation from office the Deputy Minister for Trade and Industry, Hon. Carlos Kingsley Ahenkorah, MP, which takes immediate effect,” a statement signed by Eugene Arhin, Director of Communications, Office of the President read.