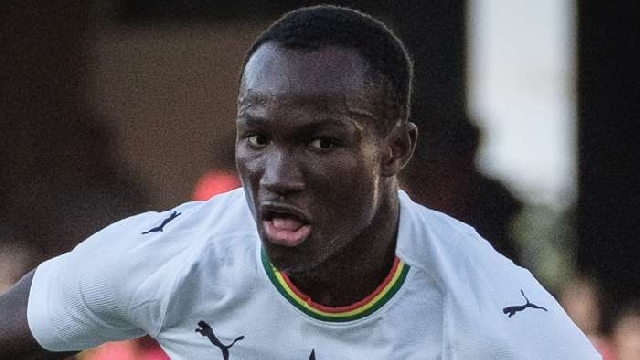 Danish club Vejle have withdrawn Ghana striker Raphael Dwamena from team engagements due to a relapse in his heart condition.

On loan from Spanish La Liga side Levante, the 25-year-old was looking to make a big comeback this season after a similar health problem truncated a loan spell with Real Zaragoza in the Spanish second division last term.

He has made five league appearances for the newly-promoted club Vejle and scored twice.

“After the club’s promotion to the 3F Superligaen, Vejle Boldklub signed a contract with Raphael Dwamena,” the Danish outfit had announced on their official website.

“The Ghanaian attacker came to Norreskoven after a heart operation in January, where the 25-year-old attacker had an ICD-Implantable Cardioverter Defibrillator implanted.

“This has been continuously monitored by Vejle Boldklub’s health staff and medical team throughout the start-up, on the training ground and during the club’s matches.

“There has now been a single case where Raphael Dwamena’s limit values ​​when monitoring the heart have been too high, and this unfortunately also means that Vejle Boldklub must now take Dwamena off the field.”

It is the third time Dwamena’s career is having to take a hit by his heart condition. In 2017, the Nkawkaw-born saw a move to Premier League side Brighton and Hove Albion cancelled for reportedly failing a medical in relation to his heart condition.

“I am truly grateful for the opportunity that Vejle Boldklub gave me to play football again. Now I have been taken off the field and am under medical supervision,” the forward said.

“Despite not being able to be on the pitch, I still want to help the club achieve its goals. Therefore, I would also like to say to both my teammates, the staff and the fans that I am proud to be part of the Vejle Boldklub family.”

In the summer of 2018, he transferred to Spain to join Levante.

“That there has now been one case where the limit values ​​have been too high, we must, based on a health professional assessment as a club, take the consequence. Raphael is therefore taken off the field,” Vejle technical manager Jacob Kruger said.

“We are, of course, sorry on Raphael’s behalf, but the parties have been aware from the outset of the consequence that would have been the case if Raphael’s monitoring had exceeded the limit values ​​in the measurement.

“Raphael Dwamena has in her short time in Vejle Boldklub shown a great human format, a professional approach to her profession and a desire to learn from her towards our young players. We will now help Raphael in the new situation.”

Dwamena is a full Ghana international, scoring twice on his debut in an Africa Cup of Nations (Afcon) qualifier against Ethiopia in 2017.