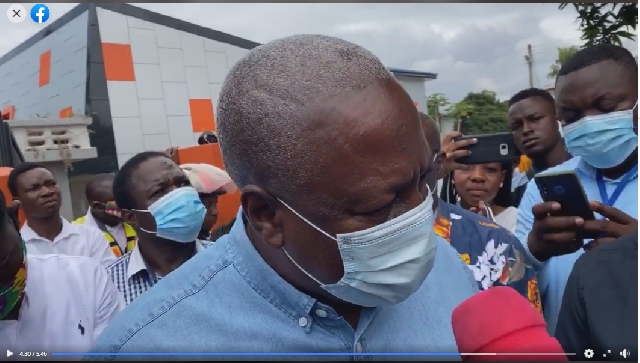 The next administration of the National Democratic Congress (NDC) will supply motorbikes to Okada operators on hire purchase terms, former President John Mahama has promised.

Speaking at a mini-durbar of chiefs and people of Kajeji in the Sene East Constituency of the Bono East Region, the NDC flagbearer said after his next government amends the law to legalise the use of motorbikes for commercial passenger services, “we’ll bring in motorbikes and give them out to you on hire purchase terms”.

Mr Mahama first made the promise to legalise Okada a few weeks ago during his tour of the Volta Region.

The promise was captured in the NDC’s 2020 manifesto dubbed: ‘The People’s Manifesto’.

Meanwhile, Vice President Dr Mahamudu Bawumia has said: “You don’t want to finish graduate school and then get a life in Okada riding”, insisting: “You can have a better option, and we will give you a better option”.

Dr Bawumia said the Akufo-Addo government’s proposal to introduce a flexible vehicle-leasing scheme for commercial drivers is a safer and better option than legalising the use of motorbikes for commercial passenger services (Okada) in Ghana.

The NPP’s 2020 manifesto has pledged to introduce a new transport financing scheme dubbed Transport Sector Recapitalisation policy, which will assist commercial drivers to own brand new vehicles being assembled in Ghana through flexible lease terms.

Throwing more light on the scheme and the controversial decision by former President John Mahama to legalise the Okada business at a strategic partnership signing ceremony between VW and Black Ivy in Accra on Wednesday, Dr Bawumia announced that instead of the government legalising the “risky” operations of Okada, the government is providing a “better and safer” option for Okada owners to upgrade to vehicle owners through the Transport Recapitalisation Programme.

“There’s been a recent discussion about Okada, this motorcycle transport.

“I think that in the context of what we are doing, we will rather encourage the Okada riders to come in and try to lease these vehicles so that they can run businesses,” Dr Bawumia said, referring to the new VW cars which have been assembled in Ghana.

“In the Transport Sector Recapitalisation project, what we are proposing is for government to come in the middle to provide support for our drivers; the taxis, trotros and buses to be able to essentially lease these new vehicles that are being made in Ghana.”

The Vice President noted that after careful considerations by the government, it has decided not to legalise the Okada business in the larger interest of Ghanaians because it poses a major risk.

He urged owners and riders of Okada to consider their safety, and rather see a bigger and safer option in the NPP’s transport recapitalisation policy, through which, he said, they can lease brand new vehicles with their National ID cards and digital address system.

“They need to graduate from this risky and less safe Okada riding to a safer means of transportation.”

“Their problem will be a lack of capital, but if you bring in new leasing policy and we have our national ID cards with our digital address system and so on, we can have a credit system working and give you an option, other than this risky business.”

“Let’s give them opportunities to lease safer vehicles and pay over time. I think it is a better option than what the alternative thinks.”