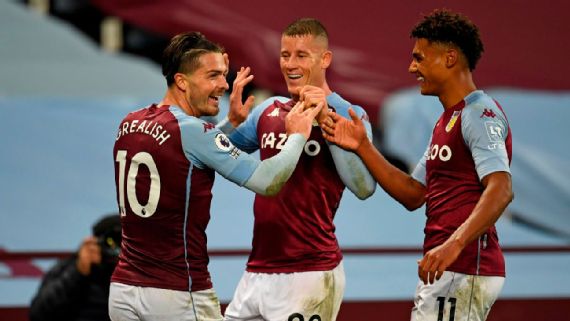 Premier League champions Liverpool fell to a shocking 7-2 defeat against Aston Villa on Sunday, their first defeat of the campaign.

Ollie Watkins scored a first-half hat trick as Villa stormed to a 4-1 lead at the interval with John McGinn having scored the other after Mohamed Salah had temporarily reduced the deficit to 2-1.

Liverpool started badly at Villa Park as a poor pass from Adrian — deputising for Alisson in goal for the visitors after the Brazilian picked up a shoulder injury — gifted Watkins the opener in the fourth minute.

If there was an element of good fortunate about Watkins’ first goal in a Villa shirt, his second was all his own fine work as he cut inside before firing into the top corner to stun the champions and make it 2-0 in the 22nd minute.

Villa continued to attack after the break and scored a fifth 10 minutes into the second half as Ross Barkley scored his first goal for his new club.

Salah pulled another goal back for the visitors but Villa captain Jack Grealish added another two to seal an historic victory for a club who only avoided relegation from the Premier League last season on the final day of the season.

Earlier on Sunday, Manchester United lost 6-1 to Tottenham, making this the first time both teams conceded six goals each on the same day in the two clubs’ history.

Information from Reuters was used in this report.