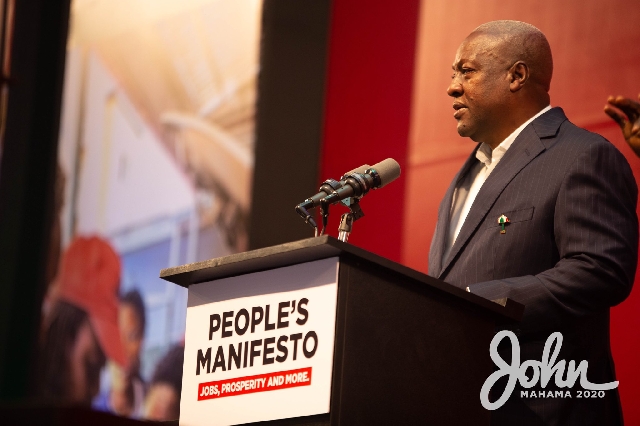 The former president is expected to highlight “the integrity challenges of the electoral process and unfolding events that threaten to undermine Ghana’s stability and democracy.”

A press statement signed by NDC’s Campaign spokesperson, Mr James Agyenim-Boateng, indicated that the address will take place at the party’s h eadquarters in Accra at 1pm.

Mr Mahama and his vice presidential nominee, Prof Naana Jane Opoku-Agyemang, suspended their campaign tours of the Bono and Central regions, respectively, following reports of widespread anomalies in the EC’s provisional voter register, which is currently on exhibition at polling stations throughout the country.

Mr Mahama expressed his displeasure over recent cases of duplication of names in the new voter register on Tuesday, 22 September 2020.

Describing the electoral process as one characterised by “so much disorder, anarchy and chaos”, Mr Mahama said the EC has exhibited “legendary incompetence” thereby calling on international observers to get involved.

He said “many have gone to check and in many places, there are anomalies, several anomalies that our party has detected”.

“Now, if there was an issue in compiling the register, where the codes of the codes of the various equipment were found to be duplicates, and it was necessary to issue voter cards, why were the political parties not informed?

“We want electoral observers to come long in advance; international election observers must be deployed long in advance to supervise the electoral process going into the election. We will make a major statement on this matter in due course, very soon”, he said, adding: “But in the meantime, I’ll suspend the campaign in the Bono Region, there are several constituencies that were expecting us today and tomorrow and the day after. I wish to apologise to them. As soon as this matter is addressed in Accra, I’ll quickly come back and finish the tour of the Bono Region”.