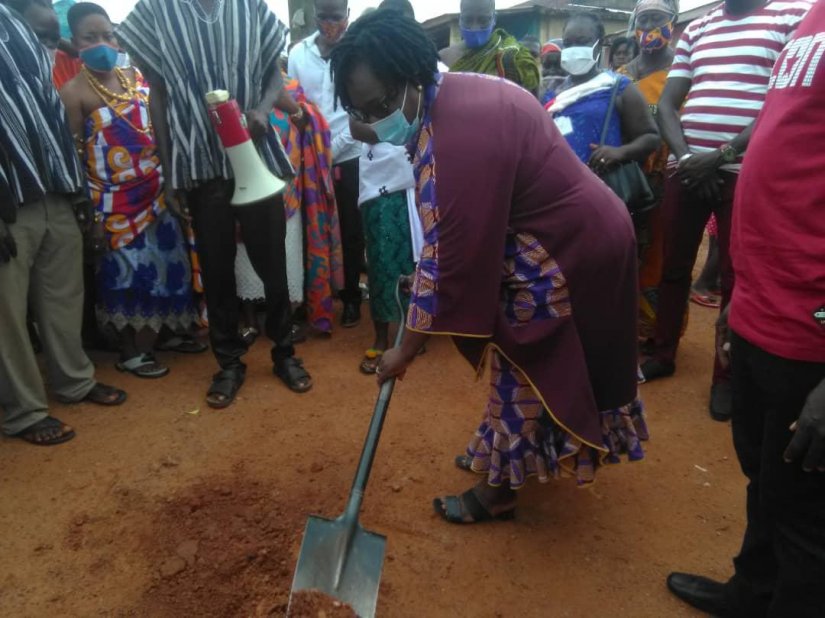 The MP who is also, the Deputy Minister of Lands and Natural Resources said “the declaration made by President Akufo-Addo that this year is the year of roads was not mere rhetoric”.

Addressing the Chiefs and People of Dahom, Mrs Eyiah Quansah said the government would never disappoint or fail the inhabitants in the fair share of the national cake.

She refuted allegations that the construction and tarring of Dahom road contract was signed by the previous government, saying it was rather signed in May this year and not as some opposition Party members were circulating round.

The MP hinted that government would make sure it was done within the stipulated period to justify its truthfulness.

She called on the people of Dahom to vote for President Akufo-Addo and herself as MP in the upcoming December 7 polls, adding that there were massive infrastructural development in place to help raise their standards of living.

On the ongoing voter registration exercise, the MP asked the Chiefs and the people of Dahom to register since it was their power to vote to elect credible, visionary and competent leaders for Ghana.

She cautioned against the action of individuals or group of people who were bent on disrupting or disturbing the ongoing registration exercise and urged them to stop.

Oseadieyo Ayeboafo Atuah, Managing Director of Nana Kwame Atuah Construction Company, the Contractor, assured the people that the one year duration of the contract would be executed to perfection.

The contractor appealed to the people of Dahom not to take entrenched position of “No road No Vote” saying this would put pressure on them and could result in shoddy work.

Oseadieyo Ayeboafo Atuah said the construction works would not be compromised to ensure value for money and appealed to the chiefs and people to exercise greatest restraints as the contract would not be abandoned as perceived.

Nana Esilfuah III, Queenmother of Gomoa Dahom expressed appreciation to the MP for her concern and sense of responsibility to fulfill the promise she made at their annual Akwambo festival in January, this year, that the road would be constructed and tarred.

She said the chiefs and the people were firmly behind the MP and the President Akufo-Addo, adding that all eligible people and the youth have been encouraged to troop to voter registration centers to register.

She cautioned them to desist from acts of violence during and after the exercise.