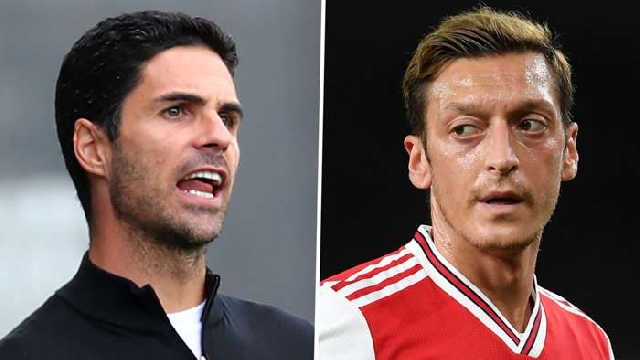 The former Real Madrid star will now not be able to play for the Gunners until February after he was also left out of the squad for the Europa League Mesut Ozil will not be included in Arsenal’s 25-man Premier League squad, which has to be submitted by Tuesday afternoon.

But the likelihood is that the German has now played his final ever game for the club where he has spent the past seven years following his move from Real Madrid in 2013.

Premier League rules state that Arsenal must submit their 25-man squad by 2pm BST (9am ET) on Tuesday and it must include a maximum of 17 non-homegrown players over the age of 21.

Arteta has 19 to choose from, however, due to the club’s failure to move on some fringe players during the summer transfer window, meaning that two senior stars can’t be registered to play during the first half of the season.

And Ozil and centre-back Sokratis have been informed they will not make the squad. The decision comes just a week after both were also left out of the squad for the Europa League group stages.

Speaking about his decision not to include the senior pair in his plans for the Europa League, which gets underway on Thursday night when Arsenal visit Rapid Vienna, Arteta said: “I wanted to tell them face to face.

“I explained the reason why and it was really difficult for me to tell them that, but this is the restriction and rules and they have to respect that decision and try to train the best possible way, help the team how they can in that moment and see what happens.”

Ozil’s last appearance for Arsenal came in last season’s home win against West Ham, the final match before football was suspended due to the coronavirus pandemic in March.

He has not even made a matchday squad this season, even in the early stages of the Carabao Cup when Arteta has rung the changes.

When quizzed on the playmaker’s absence after the 2-0 win at Leicester last month, the Arsenal boss said: “The team is evolving, you can see the level they are achieving. This is where we are at the moment. We want to evolve more and play better and compete better.

“You can see that the players we are changing, we are using, it’s very difficult every week not just for Mesut but for some other players as well to make the squad. Every week we try to pick the right players.

“It’s difficult for others as well that aren’t involved in the Premier League and didn’t play tonight either. We have a squad of 26, 27 players at the moment and we can’t give playing time to all of them.

“I understand and I respect your questions but I have to try to do my job as fair as possible. I try to select the players that are, in my opinion, in better condition.”

Arsenal had hoped to move Ozil on during the summer transfer window and there was interest in the playmaker from clubs in the Middle East, but he has always maintained he would see out his contract with the Gunners, which runs until 2021.

Should that remain the case, then it looks like he has played his final game for the club as it is highly unlikely that Arsenal will include him in their squads for the second half of their Premier League and Europa League campaigns, which will have to be resubmitted following the January transfer window.