Planting for Food and Jobs: We are grateful to government – Poultry farmers 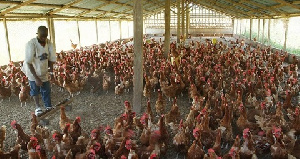 The Greater Accra Poultry Farmers Association (GAPFA) has commended the government of Ghana for introducing its flagship programme, ‘Planting for Foods and Jobs’ which has ultimately benefited both crop and poultry farmers.

In an exclusive interview with Samuel Eshun on the Happy Morning Show, the President of the Association, Michael Nyarko Ampem, revealed that the programme had increased the quantity of maize while reducing the price of the cereal grains for the benefit of everyone.

If demand becomes more than supply, the prices shoot up but when the demand is low the price lessens. Now we are operating at an optimum level. So it benefits both crop farmers and poultry farmers”.

This programme which was launched by President Akufo-Addo on April 19, 2017 aims to promote food security and immediate availability of selected food crops on the market as well as provide jobs for the populace.