Prestea chief hails impact of Free SHS on his people 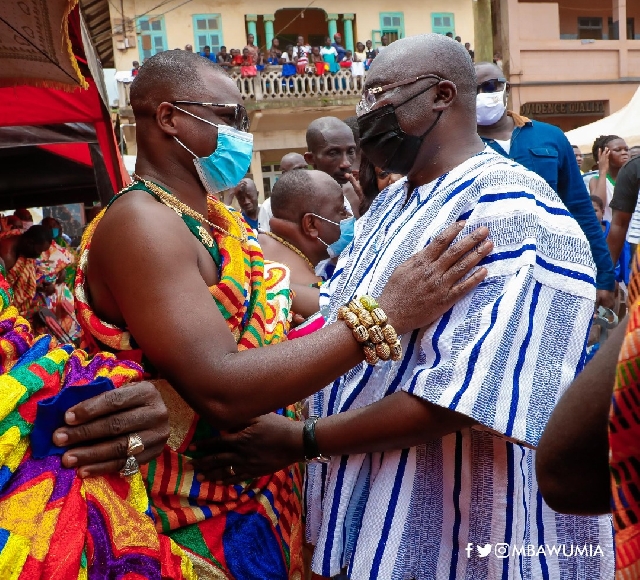 The chief of Prestea, Nana Nteboa Pra IV, has hailed the impact of government’s flagship educational intervention, Free SHS on his people.

According to the Prestea chief, the Free SHS intervention, introduced by President Akufo-Addo in his first year of office in 2017, has taken a huge financial toll off parents and paved the way for children to access secondary education.

“The government has done many good things since assuming office,” Nana Nteboa Pra IV said during the visit of the Vice-President on Thursday, October 8, 2020.

“For us in Prestea, the Free SHS has helped many parents and we are very grateful to the government.”

The Prestea chief also hailed the government for the massive road construction and rehabilitation projects going on in the Prestea township and its surroundings.

He said the magnitude of road construction works has given the town a major facelift to the extent that “people may miss their routes”.

“Our town roads have been in a deplorable state but it is currently being constructed and we can’t wait to have our asphalt,” he said.

“I thought we were going to benefit from 10 kilometres of our town roads, but I have been told that it has been expanded to 25 kilometres. We have also had five extra kilometres of asphalt road and I was asked to suggest where I want it to be. We are very grateful to our MP, Hon Barbara Oteng Gyasi, the MCE and the government for this.”

While commending the government, the Chief also requested for more development for his people.