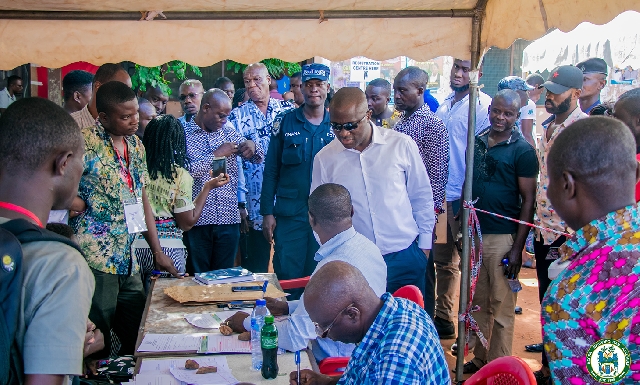 CODEO has called on the EC to reopen registration

The Coalition of Domestic Election Observers (CODEO) has called on the Electoral Commission (EC) to reopen registration in areas where persons were unable to register although they availed themselves to undertake the exercise.

CODEO made the call in its recommendation as part of its preliminary report on the exercise covering Phases 4, 5, and 6 and the two-day mop-up exercise carried out at the various district offices of the EC.

CODEO firstly commended “the EC and the general public for the generally smooth mass registration exercise over the past six weeks” while condemning “all acts of intimidation, harassment and use of violence which took place during the exercise”.

CODEO further called on the Inspector General of Police (IGP) and the Ghana Police Service working with the Attorney General (AG) to act expeditiously to complete all investigations including the violent incidents in Banda which resulted in the death of one young man, as well as the incident in Awutu Senya East in the Central Region and in Dormaa West in the Bono region.

CODEO noted that persons found culpable in various criminal breaches of the law should be prosecuted and sanctioned in accordance with the laws of Ghana.

CODEO also urged “the EC to re-open registration in specific areas where people who had made themselves available for registration could not do so.”

It also cautioned “all political parties to desist from the use of incendiary language that unnecessarily polarises the country along ethnic and extremely partisan lines as this can lead to dire consequences for the country in the short to long term. CODEO believes that stakeholders can raise genuine concerns about the electoral process without necessarily using such polarising language.”

The election observers recommended that towards the conduct of the general elections the National Election Security Task Force should constantly engage all key stakeholders including the political parties on security arrangements for the December polls to bolster stakeholder confidence and trust in election security.