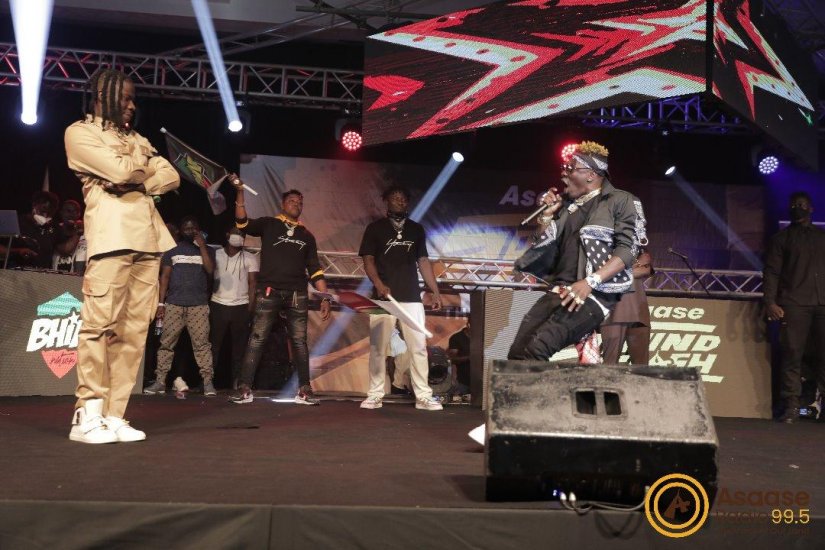 The event, which was held at Movenpick Ambassador Hotel was streamed live worldwide as the two multitalented dancehall giants electrified the audience with their first-ever historical head-to-head musical battle.

By the end of the night, it was clear that both Stonebwoy and Shatta Wale were unquestionably deserving of the iconic status that they have on the continent, and that it was impossible to place one above the other.

Despite both artistes claiming victory after the historical concert, Mrs. Naomi Nelson-Barnes, Head of Marketing, Communications Event, and Promotions at Asaase Radio stated “the artistes performance was way beyond what was anticipated but was delighted about putting up a successful event. We cannot determine who the king of dancehall was.

“At this point we have left it completely in the hand of the general public to decide for themselves.”

Leading to the event, Asaase Radio had engaged in several activities including making a donation of Personal Protection Equipment (PPE) at the Ashaiman Polyclinic in Ashaiman, the home base of the BHIM Nation, and at the Korlebu Polyclinic in Korlegono where the Shatta Movement hails from.

There was also a text-and-win on-air promotion in which the general public was asked to text to a dedicated shortcode and say who they think the King of Dancehall is, after which the person with the highest number of texts at the end of the polls would win a brand-new car.

Over the weeks that preceded the event, thousands of people texted in, with the results fluctuating from more texts swaying towards one artist and the swaying back to the other. Indeed, on the day of the event, the results of the text ins swayed almost on an hourly basis, until 8:30 pm when the polls were closed.

Once the system had concluded collating all the results within the five-minute processing period which was given to every text-in process, including those that had been initiated as late at 8:29pm – right before the closing time, Mr. Patrick Mensah Nartey emerged the winner of the promotion with 48, 775 individual text messages in support of his favourite artiste.

On Thursday 17 September, after vetting, authentication, and approval by National Lottery Authority (NLA), Mr. Nartey was presented with the brand-new Mahindra KUV 100 in a short ceremony at the premises of Asaase Radio in Cantonments. Nana Opoku Agyeman, Chief Executive Officer of Asaase Broadcasting Company Limited, speaking to the press afterward, noted that “It is amazing to see such dedication as has been displayed by Mr. Patrick Nartey… He truly deserves to win this car”.

Nana Opoku Agyeman added “Mr. Nartey has told us that he is definitely a staunch supporter of the Shatta Movement, and therefore texted accordingly. This does not mean in any way that the SM camp has won anything over the BHIM nation”.

The Asaase Sound Clash was produced in partnership with Digicraft Brand Solution Limited and Purp Star Consult Limited and supported by the Ministry of Health, the Ghana Tourism Authority, Visit Ghana and the National Lottery Authority.