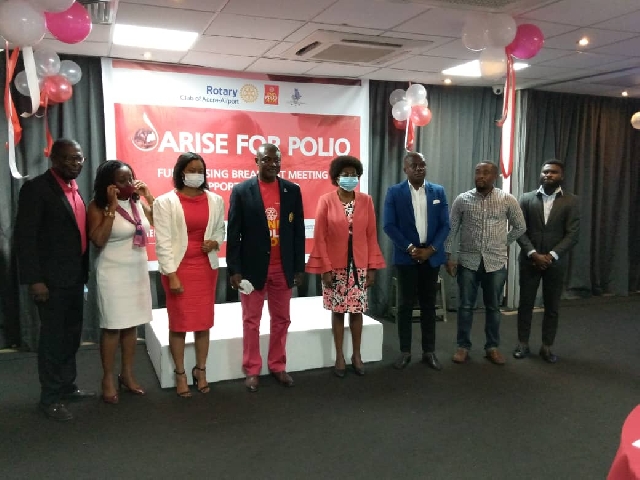 The Rotary club of Accra Airport on Thursday, 22 October 2020 held the 2nd edition of the ‘Arise for Polio’ fundraising breakfast meeting.

The Arise for Polio initiative is to support the $120 million pledge to support the polio plus project of the Rotary Club International and to herald the celebration of Polio Eradication Day which fell on 24 October 2020.

The meeting was attended by members of the club, partners, donors from the business community in Ghana and officials of international organisations including UNICEF and the World Health Organisation.

In his Address, President of the Rotary Club of Accra Airport, Nana Gyamfi Acheampong explained that the club’s determination to achieve a polio-free world has energised business organisations and government.

He further noted that the arise for polio eradication programme has made significant strides as Africa has now been declared free from wild polio infections.

He, however, indicated that the world is not entirely out of the woods when it comes to combating polio hence, the breakfast meeting has been sustained to “constantly remind members of the club and our partners of the determination of Rotary International to eradicate polio.”

For her part, Country representative of the WHO in Ghana, Dr Neema Rusibamayila commended the rotary club of Accra for aligning with the global vision of the United Nations (UN) to eradicate polio.

She noted that although significant strides have been made in the fight against polio a lot more ought to be done.

Rawlings’ family welcome decision to rename UDS after him