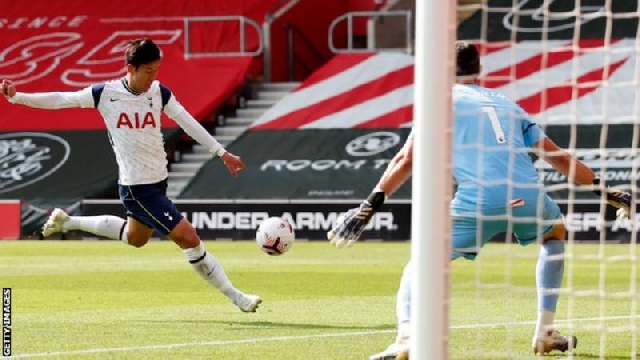 Son Heung-min scored four goals in a stunning display as Tottenham secured their first Premier League win of the season by coming from behind to thrash Southampton.

The South Korea international combined with Harry Kane for all four of his goals as Spurs took control after Danny Ings’ fine finish from a tight angle had given Southampton a first-half lead.

Son’s first came on the stroke of half-time when he raced on to Kane’s pass before driving across Alex McCarthy and into the back of the net.

The pair opened up Southampton again as Spurs took the lead soon after the restart, Kane sending Son through one-on-one and the forward making no mistake.

The hosts struggled to deal with Son’s superbly timed runs behind the defence and he duly got his third, racing on to Kane’s clipped pass before slotting in.

Kane then provided his fourth assist of the day with a brilliant cross for Son, who coolly chipped McCarthy, before Kane got in on the scoring himself when he stabbed in from close range after Erik Lamela’s shot had been pushed on to the post.

Ings converted a penalty in stoppage time but it was scant consolation as Southampton slumped to their third consecutive defeat in all competitions.

This was a much-needed win for Tottenham after a difficult start to the season in which they were beaten by Everton on the opening day before scraping past Bulgarian side Lokomotiv Plovdiv in Europa League qualifying in midweek.

A significant reason for their defeat to the Toffees was their lack of creativity in midfield – with Dele Alli paying the price in that game for a disappointing display by being taken off at half-time.

Left out of the midweek Europa League tie, Alli was again omitted from the side for the trip to St Mary’s, with Jose Mourinho saying his absence was down to having “too many players” in certain positions.

For a long time in this game, Mourinho’s bold move looked destined to be the talking point as Tottenham sorely lacked creativity in midfield.

Aside from a couple of disallowed goals for Kane, the visitors barely troubled the Southampton defence and even when they did manage to score right before the half-time whistle it came from Tottenham’s only shot and only touch in Southampton’s box in the entire first half.

But after the break, Son and Kane took centre stage, taking advantaging of Southampton’s high line and slow defence as they demonstrated an understanding that seemed almost telepathic at times.

Kane assisted just two league goals in the entirety of last season but almost every pass he provided in the second half of this game was to set up a Son goal as he became the first player in Premier League history to assist a single team-mate four times in the same match.

With the return of Gareth Bale, Tottenham have the potential for a front three that could rival the very best in the world.