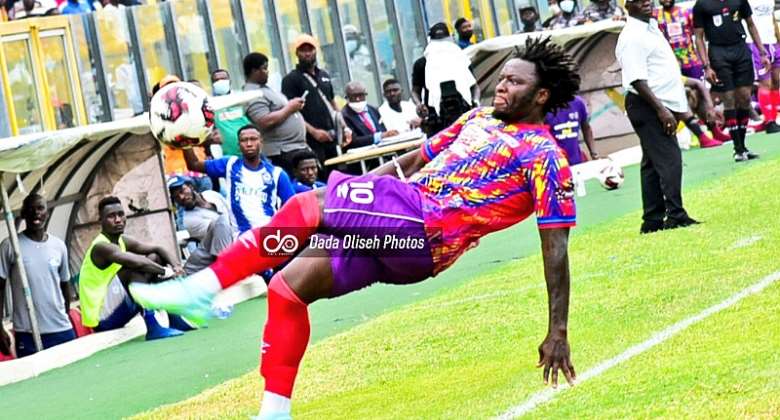 Accra Hearts of Oak and Asante Kotoko renew their rivalry this weekend, with the two most successful Ghanaian clubs meeting in the Premier League at Accra Sports stadium. It’s the biggest fixture in the Ghanaian top flight.

The Match Day 7 fixture which was postponed due to Hearts of Oak’s participation in the CAF Inter Club competition will now be played on Sunday.

Last season, the two teams shared the spoils in the first round before Daniel Afriyie Barnieh’s strike gave the Phobians the three points in the second round – a win that won them the title.

The defending champions trail their arch-rivals by 12 points and sit 7 places below their bitterest rivals in the League log. With four wins, two draws and three defeats in their last nine Premier League matches, Hearts of Oak must play above themselves to avoid any kind of setback against Asante Kotoko at the Accra Sports stadium having lost 2-1 to the Porcupine Warriors in January 2020.

Coach Samuel Boadu is heading into his second game against Asante Kotoko as Hearts of Oak coach having taking over the reins of the Club in March 2021. The purchase of Sulley Muntari has changed the feeling in the locker room but he has yet to inspire the team to victory in two appearances.

The former Inter Milan man came on as a second-half substitute against Great Olympics and played for about 75 minutes against Real Tamale United but none of those games ended in a win as Hearts lost to Olympics and drew goalless with RTU. Another seasoned campaigner who has joined the Phobians is former captain of Ebusua Dwarfs Dennis Korsah – who is a direct replacement for Raddy Ovouka – now with USL Championship club New Mexico United.

Even though goals have been hard to come by – Samuel Boadu must find the right balance upfront with the likes of Kofi Kordzie (6 goals), Daniel Afriyie Barnieh and Kojo Obeng Jnr., Isaac Mensah and Benjamin Yorke all available for selection.

Hearts of Oak’s top scorer Kofi Kordzie has not scored since January 16 when his brace inspired the Phobians to a 4-1 win against Eleven Wonders Accra.

Leaders Asante Kotoko bounced back to winning ways on following a 3-1 win against Accra Lions at the Baba Yara Sports stadium on Saturday.

The Porcupine Warriors went into the game on the back of a 2-1 loss to bottom-placed Elmina Sharks – their second defeat of the season as they lead the table with 33 points – 6 points richer than second-placed Bechem United and 14 points.

Imoro Ibrahim, Ismael Ganiyu, Mudasiru Salifu and striker Etouga Mbella have peaked at the right time and would be crucial to their success in Sunday’s encounter. Mbella has scored in back to back matches – a brace against Great Olympics and a hat –trick against Accra Lions to take his season tally to 11 goals in 14 matches – making him the leading scorer in the League.

Coach Dr. Prosper Narteh Ogum has not played against Hearts of Oak since he took over as coach of the Porcupine Warriors and a positive outcome of the encounter will further deepen the cult figure he’s building at the club.

Asante Kotoko have won three (against Bibiani Gold Stars, Legon Cities and Aduana FC), drawn two (against Karela United and Berekum Chelsea) and lost one ( Elmina Sharks) in their last six matches on the road –scoring four and conceding three in the process.

The match which is scheduled for 3pm kick-off at the Accra Sports stadium on Sunday, February 20, 2022, will broadcast live on StarTimes Adepa Chanel 247.