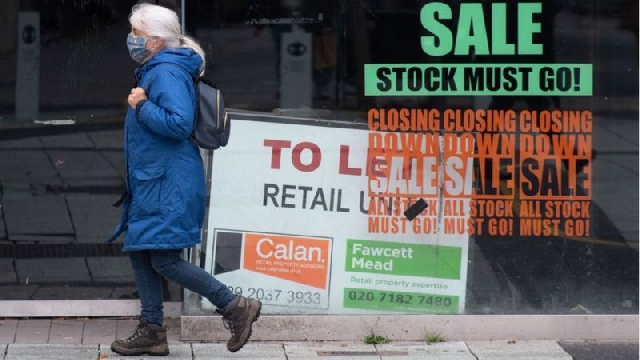 A woman passing by a closed shop

The UK unemployment rate has surged to its highest level in over three years as the pandemic continues to hit jobs.

The unemployment rate grew to 4.5% in the three months to August, compared with 4.1% in the previous quarter.

Meanwhile, redundancies rose to their highest level since 2009, the Office for National Statistics (ONS) said.

It comes as the government prepares to impose tough local lockdown rules that will force some businesses to close, potentially leading to more job losses.

Jonathan Athow, the ONS’s deputy national statistician for economic statistics, said there had been a “sharp increase” in those out of work and job hunting since March.

“Overall employment is down about half a million since the pandemic began and there are particular groups who seem to be most affected, young people in particular,” he told the BBC’s Today programme.

Mr Athow said the large number of redundancies had been focused on sectors such as hospitality, travel and recruitment.

According to the ONS, an estimated 1.5 million people were unemployed between June and August, while redundancies stood at 227,000.

The number claiming work-related benefits, meanwhile, hit 2.7 million in September – an increase of 1.5 million since the beginning of the crisis in March.

Most expect unemployment to rise further after the government’s furlough scheme is replaced with a less generous wage support package in November.

Analysis from Citibank suggests the unemployment rate could hit 8.5% in the first half of 2021 – a level not seen since the early 1990s.

Commenting on the latest unemployment figures, Chancellor Rishi Sunak, said: “I’ve been honest with people from the start that we would unfortunately not be able to save every job. But these aren’t just statistics, they are people’s lives.

“That’s why trying to protect as many jobs as possible and to helping those who lose their job back into employment, is my absolute priority.”

He said for those who do lose their job, there would be new opportunities through apprenticeships, traineeships and the £2bn Kickstart scheme, as well as extra work search support.