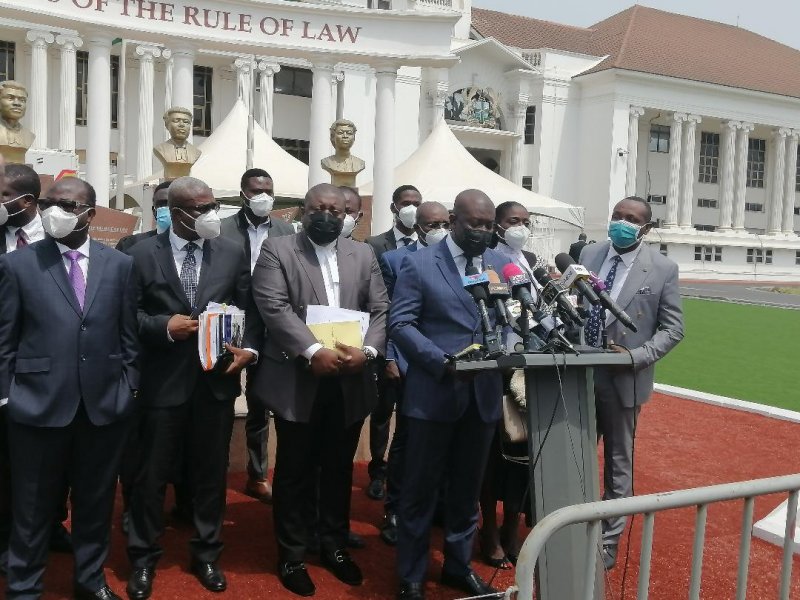 Mr Kojo Oppong Nkrumah, a Spokesperson for President Nana Addo Dankwa Akufo-Addo, Second Respondent in the 2020 Presidential Election Petition on Monday said the Counsel for the Respondent are not convinced that the Petitioner has provided any evidence in court.

He said the Petitioner, through his witnesses were unable to provide to the court that none of the Presidential Candidates in the presidential election 2020 obtained 50 percent of the votes cast, hence their announcement that they do not intend to call any fresh witnesses.

Mr Nkrumah speaking in a post-trial interview said “on our side, the view and believe is that the Petitioner has not made any case to enable us to call our witness.”

He said the whole country has been waiting, especially the supporters of the NDC to see their officials prove that nobody got 50 per cent but that did not happened.

He said the Counsel for President Akufo-Addo made that announcement to the court because the evidence and the cross examination of the Petitioner’s witnesses was enough for them.

He said Counsel for the Petitioner wanted literally to compel the Respondents to bring witnesses to adduce some evidence to help them in their course.

Mr Nkrumah said Counsel for the Second Respondent had always insisted that the burden of prove lies on the Petitioner, sections 14, 17 of evidence Act were very clear on that. “He who alleges must prove,” he said.

He said the Petitioner has told his supporters across the country that, he had won the 2020 Presidential Election and that they should get on the street, which they did resulting in deaths, injury to people, others having some infractions with the Police and getting arrested.

After the cross-examination of Robert Joseph Mettle-Nunoo, the third witness for the Petitioner by Mr Akoto Ampaw, Counsel for the Second Respondent and Justin Amenuvor, Counsel for First Respondent, Mr Tsatsu Tsikata informed the court that, they have closed their cases.

Counsel for the Respondents had initially indicated to the court that they would call one witness each for which witness statements were filed but later disclosed that they do not intend to call those witnesses anymore.

The court will on Tuesday February 9, 2021 listen to the legal arguments from parties and give their ruling.

Initially, the Petitioner through his Counsel informed the court that they intended to call five witnesses but ended up calling three in the persons of Mr John Asiedu Nketia, the General Secretary of the National Democratic Congress (NDC), Dr Michael Kpessa-Whyte and Mr Robert Joseph Mettle-Nunoo, all leading members of the NDC.

Former President Mahama has filed a Petition at the Supreme Court seeking an annulment of the Presidential Election Results and a re-run of the election between him and Nana Akufo-Addo who is the second Respondent in the petition.

The Petition is also seeking an injunction directing the 1st Respondent, the Electoral Commission to proceed to conduct a second election between the petitioner and the 2nd respondent as candidates, as required under Articles 63 (4) and (5) of the 1992 constitution.

The trial has been adjourned to Tuesday February 9, 2021 for continuation.