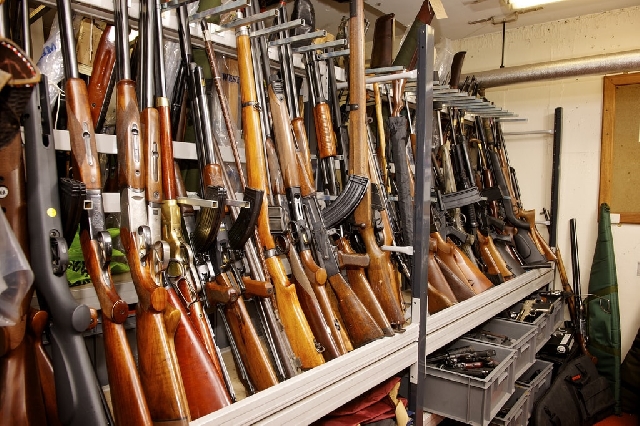 A situational report filed by the Sogakope Police Command to the Volta Regional Police Command, has revealed that the Western Togoland militants who blocked entries and exits to and from the region on Friday, 25 September 2020, as part of their secessionist activities, broke into the armouries of the Aveyime and Mepe police stations and stole 10 AK-47s.

The report said: “On 25 September 2020, at about 1:00 am, the police had information that the Western Togolanders had taken over the Aveyime and Mepe police stations” and also taken the personnel “hostage” as well as released a cell inmate then bolted with 10AK-47 assault rifles.

It continued: “On the receipt of information, the Divisional Commander C/supt. Mr Denis Fiakpui, in-charge men proceeded to the scene.

“At about 2:15 am, information received indicated that the rebels had allegedly overpowered the police” and taken “over the police vehicle” as well as the “divisional commander’s sidearm” and “severely assaulted and shot him alongside L/Cpl Prosper Banini, service driver”.

They were “rushed to the Batttor Government Hospital,” the report said.

Furthermore, it said: “The military reinforcement team from Agorta Naval Base were quickly contacted who rushed to the place.

“The military had an encounter with the alleged rebels at Tademe and in the process, gunned down three of the rebels” who are “currently at the Sogakope Government Hospital”.

Military enforcement teams are currently on the ground at Aveyime and Mepe, the report noted, adding: “Efforts are underway to move the injured who are in critical condition, to the Police Hospital for further treatment”.

Meanwhile, the Ghana Armed Forces and the Ghana Police Service have issued a joint statement in which they said they were able to foil attempts by secessionist groups in the Volta Region, to burn down the Ho Central Market.

“It is hereby stated that an earlier pre-emptive operation on Thursday, 24 September 2020, foiled a plan by the Group to burn the Ho Central Market and other key installations”, the statement jointly signed by the Director of Public Relations for the Ghana Armed Forces, Col. Eric Aggrey-Quarshie, and the Director of Public Affairs for the Ghana Police Service, Superintendent Sheila Kessie Abayie-Buckman, said.

Also, the statement said 31 members of the militant group, which mounted roadblocks to stop all entry and exit, to and from the region, respectively, were arrested on Friday, 25 September.

The Homeland Study Group Foundation (HSGF), which has declared the region independent of Ghana, insists on the area’s autonomy from Ghana, thus, its activities.

One of the militants, according to the security agencies, was killed during their attempt to take over the Volta Region on Friday.

Three others got injured.

Also, “the Police Commander at Aveyime was wounded and has been evacuated to the Police Hospital”, the statement noted.

Additionally, it said the “wounded HSGF members have also been evacuated to the Ho Teaching Hospital”.

1. The Ghana Armed Forces (GAF) and the Ghana Police Service (GPS) hereby jointly make reference to the activities of the Homeland Study Group Foundation (HSGF), which occurred at the dawn of Friday, 25 September 2020, in the general area of Juapong, Sogakope, Aveyime, Mepe and Akuse and to assure the general public that the situation has since been brought under control.

2. It is confirmed that at about 2:00 am on the stated date, elements of the HSGF attacked the Aveyime and Mepe police stations, and further mounted roadblocks on the Juapong–Accra and Sogakope–Accra main roads, thereby disrupting the daily routine of the citizenry.

3. In response to these unlawful acts, a joint military-police Team, in conjunction with other security agencies deployed to the affected areas and succeeded in apprehending 31 members of the Group.

These arrested persons have since been brought to Accra for interrogation. Fire exchanges between the Group and the Security Agencies led to the death of one (1) member of the HSGF and injury to three (3) others.

The Police Commander at Aveyime was also wounded and has been evacuated to the Police Hospital.

The wounded HSGF members have also been evacuated to the Ho Teaching Hospital.

4. All the roadblocks have also been cleared and the security agencies have taken control of the highways and strategic installations within the Region.

It is hereby stated that an earlier pre-emptive operation on Thursday, 24 September 2020, foiled a plan by the Group to burn the Ho Central Market and other key installations.

5. We wish to re-assure the general public that the security and intelligence agencies are in firm control of the situation and remain undaunted in their resolve at preserving and protecting the sanctity of the entire territory of our dear country.

6. In the meantime, the general public is entreated to remain calm and to volunteer any relevant information on the activities of the Group for necessary action to be taken.