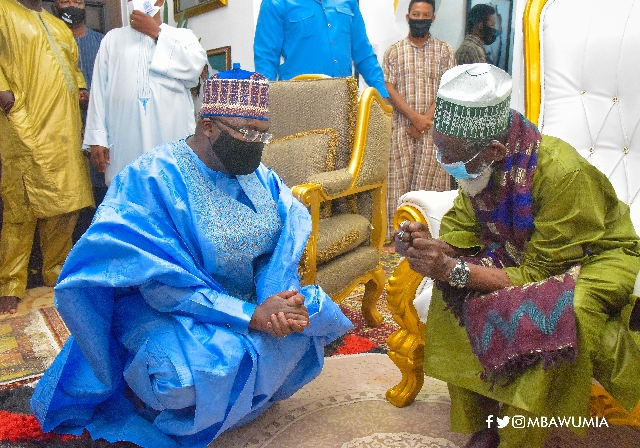 Ghana’s Vice-President Dr Mahamudu Bawumia has said the governing New Patriotic Party, under the leadership of President Nana Akufo-Addo, has fulfilled its 2016 electoral promises to the people of Zongo in its first term of office.

Speaking during a visit to the National Chief Imam on Sunday, 12 July 2020 to officially inform him of his re-nomination as running mate to President Akufo-Addo for the December’s Presidential elections, Dr Bawumia recalled that prior to the 2016 elections, President Akufo-Addo promised the National Chief Imam and the people of the Zongo community that should Allah make him President, he would establish a ministry and a special fund to facilitate the development of zongo communities, adding that the President has duly honoured his promises.

“During the 2016 elections campaign, President Nana Akufo-Addo was here and I came with him. He promised the National Chief Imam that should God make him President, he would look after the welfare of the Zongos and Muslims. He will run an inclusive government,” Dr Bawumia recalled.

“As we prepared our 2016 manifesto, we looked at the Zongos and we identified two key problems that we thought God willing if we had the chance, we would address. One was education.”

“The other was to look for a vehicle that will prioritise development in Zongos because we wanted to move away from the rice and sugar type of development. We wanted to focus on the real needs of the people and we wanted to move away from what we will do when it is Ramadan and Hajj, which seemed to be the way the Zongos were dealt with. We thought we needed a vehicle to prioritize and address the needs of zongos on an ongoing basis”.

“It is in that context that President Nana Akufo-Addo did two things. First, he established a whole minustry for inner city and zongo development as well as the Zongo Development Fund with funding provided for in our annual budgets.”

Dr Bawumia noted that after three and half years in office, the fulfilment of the promise through the creation  of the Ministry of Inner Cities and Zongo Development, as well as the Zongo Development, have paved the way for sustainable development in the two areas in many zongo communities across the country.

“If you go around a lot of Zongos now, you will feel the impact of this ministry whether it is a classroom blocks, toilet facilities, drainage, systems, water, roads, bridges, clinics, etc. The Ministry and the Zongo Development Fund are addressing many problems in Zongos across the country,” said Dr Bawumia.

On education, the Vice-President said it is a sure way of development and poverty eradication, and therefore, a key area of concern and focus to the President hence his massive investment in the education of Ghanaian children.

“The only way any community can break out from poverty, sustainably, is through education and this does not just apply to the Zongos. It applies to the whole world,” said Dr Bawumia.

“Most of us come from the villages and the only reason we have been able to move ahead, one way or the other, is through education. So we said that one of the biggest things we needed to do was education.”

Dr Bawumia noted further that the Free SHS policy has provided free access to secondary education for every child from Zongo in Ghana, and it demonstrated President Akufo-Addo’s commitment to ensuring a brighter future for the Zongo and Ghanaian child.

He said, in line with the government’s commitment to ensure the education of the zongo child even at the highest level, his office, in conjunction with the Ministry of Inner Cities and Zongo Development Fund, provided scholarships to 40 students from Zongos and other deprived communities to go and study medicine in Cuba.

“Nana Akufo-Addo has really fulfilled his promise in these two major areas; in education he has provided free senior high school and that is a major relief to a lot of parents in the Zongos. Today insha Allah, there is no excuse for any child in Zongo not to have senior high school education. We can have education free up to senior high and that is something we have to thank Allah for. It used to be a major problem.”

The Vice President expressed President Akufo-Addo’s commitment to continue to do more for Zongos and urged them to give the President 4 more years.

He said by the will of Allah, President Akufo-Addo will continue his development and education agenda, especially in the Zongos by building sixteen model senior high schools in zongos in each of the sixteen regions, “insha Allah in his next term.”

The National Chief Imam commended Dr. Bawumia and President Akufo-Addo for their efforts at ensuring peace and development in the country.

While praying for Dr Bawumia and President Akufo-Addo for Allah’s blessings, the National Chief Imam also prayed for the country more prosperity, as well as God’s intervention in the Coronavirus pandemic.

The Vice-President was accompanied by the National Chairman of the ruling New Patriotic Party, Mr Freddy Blay and Member of Parliament for Okaikoi Central, Hon. Patrick Boamah.