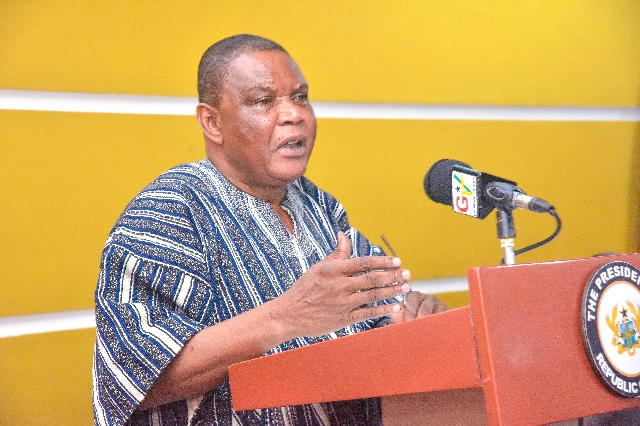 The government is determined to ramp up the speed and level of irrigation development in the country in order to increase the amount of irrigable land and ensure food security, the Minister of State at the Ministry of Agriculture, Dr Nurah Gyiele, has assured.

Explaining the governing New Patriotic Party’s irrigation development strategy over the past three years, Dr Gyiele recalled that the main problem with agriculture, particularly in the northern regions, has been a lack of water in the eight-month dry season for crop production, livestock watering, domestic use and construction purposes. Many women have to walk for miles to fetch water in the dry season and finding water for cattle is also a major problem.

Addressing the press on Wednesday, 8 July 2020, Dr Gyiele stated: “This is the main problem. We are talking about the lack of water for rural people who are mostly farmers. Historically, various governments have made efforts to increase the amount of irrigable land in the northern savanna zone. But out of the 1.9m hectares of irrigable land, only 33,000 hectares, representing 0.02% has been brought under irrigation, with only 13,000 hectares made up of public irrigation schemes. This is unacceptable”.

“Recognising this problem, upon assumption of power, the NPP government has adopted measures to bring about a change in the level and speed of irrigation development. The objective is to expand the area under irrigation; maintain and make more efficient existing irrigation schemes, some of which date back to Dr Kwame Nkrumah’s days; and to make more water available and accessible to rural dwellers, especially farmers in the dry season”, he noted.

“No government, since independence, has brought as much land under irrigation in Ghana (and the north for that matter) as the NPP is doing with the Pwalugu Dam which all other Governments since independence have paid lip service to. The Pwalugu dam alone will bring over 24,000 hectares of irrigable land into use.”

Responding to recent claims that about ninety (90%) per cent of dams constructed under Ghana’s One-Village One-Dam initiative in the Upper East Region cannot be used for irrigation purposes, Dr Gyiele questioned the basis for such a claim since among others, there are different types of irrigation schemes, construction works were still ongoing, and the date of completion was also important.

“So, for someone to say it is not suitable for irrigation, the question is: on what basis is he judging? If it is not suitable for gravity, can’t you do sprinkler? Can’t you do drip? People use wells or even poly tanks for irrigation so why can’t we use small dams? The thinking that resulted in that conclusion is not logical.  We will need to interrogate his claims further. In any case, the dams are not only for irrigation. They will provide water for household use, for livestock, for construction of homes, etc. and have brought major relief to the communities where they are located”.

The One Village-One Dam initiative, under the auspices of the Ministry of Special Development Initiatives (MSDI) is seeking to construct 560 Small Earth Dams in some remote and deprived villages across the northern regions. This is to ensure all year availability of water. These projects are funded from the allocation to each constituency, the cedi equivalent of US$1 million to finance basic Infrastructure projects.

When completed, each dam will hold more than 30,000 cubic metres of water when full, enough to survive the dry season in any year.

He said these dams, taken together with the rehabilitation of dams such as Tono and Vea and the construction of Pwalugu dam, represent a game-changer in northern Ghana in terms of access to water for domestic and basic use, for livestock and irrigation, adding that it is a holistic approach by the government.