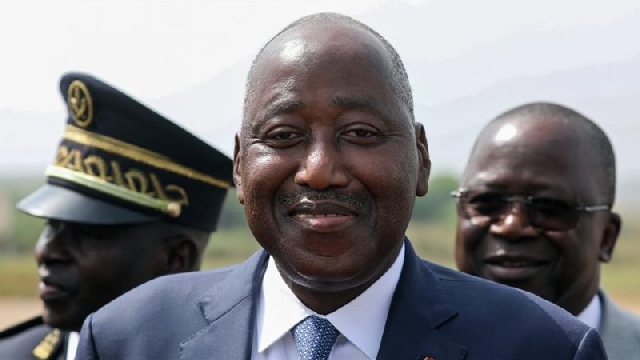 The 61-year-old, who had heart surgery in 2012, became unwell during a weekly cabinet meeting and was taken to a hospital where he passed away, according to a spokesman for President Alassane Ouattara.

Coulibaly’s death creates huge uncertainty over the election in Ivory Coast, the world’s top cocoa grower, which has returned to normalcy after years of political turbulence and a brief civil war that killed 3,000 people.

Ouattara issued a statement calling Coulibaly “my youngest brother, my son” and his closest political ally for 30 years.

“I salute the memory of a statesman of great loyalty, devotion and love for his country,” he added.

Ouattara had designated Coulibaly as the RHDP candidate in March after announcing that he himself would not seek a third term.

The RHDP has been in power since post-election violence a decade ago after then-President Laurent Gbagbo refused to acknowledge his defeat in a runoff vote. Initially, there was speculation that Ouattara would try to extend his rule, but he eventually said he would not run and threw his support behind Coulibaly.

‘A lot of tensions’

Coulibaly’s death is likely to set off a scramble within the RHDP party to replace him as its presidential candidate, with some speculating it could be Defence Minister Hamed Bakayoko.

Others suggest that Ouattara might also decide to run again now and that there is no “plan B”.

The other main candidate in the October election is former President Henri Konan Bedie, 86, who declared he would run last month.

Guillaume Soro, a former prime minister and ex-rebel leader, was also considered a contender but in April was sentenced in absentia to 20 years in prison for embezzlement.

Marie-Roger Biloa, chief executive director of the Africa International Media Group, said she expected “a lot of tensions” in the Ivory Coast ahead of the election.

“With this opening all the political forces will feel that it is a signal to come up with their own ambitions,” she told Al Jazeera. “President Ouattara will say, well the constitution allows me to run again, and then we also have a former president who is 86 years old who is running.”

There also has been uncertainty about the political ambitions of Gbagbo, the president forced from power after losing the 2010 election. He has been acquitted of crimes against humanity charges at the International Criminal Court but has been unable to return home to Ivory Coast where he still has considerable support.

Prosecutors at the ICC are appealing his acquittal.

Coulibaly had returned to Ivory Coast on Thursday after two months in France to undergo a heart exam and rest. He was allowed to travel abroad despite Ivory Coast’s airports being closed due to the coronavirus pandemic.

He received a stent about a week after arriving in France, AFP news agency reported.

“I am back to take my place by the side of the president, to continue the task of developing and building our country,” Coulibaly said on arrival at the airport in Abidjan last Thursday.

A father of five who earned an engineering degree in France, he had a reputation for hard work and a temper that led to his nickname, “The Lion” of Korhogo, the country’s fourth-largest city, which was his native place.

Coulibaly wielded great influence among traditional leaders of the Senoufo ethic group, from which he came.

But critics said he lacked charisma and his nomination for president did not go down well with several leaders of the ruling RHDP.

His many positions since starting out in politics in 1994 at Ouattara’s side included technical advisor, senior civil servant, deputy and mayor of Korhogo, agriculture minister, cabinet minister and finally prime minister.