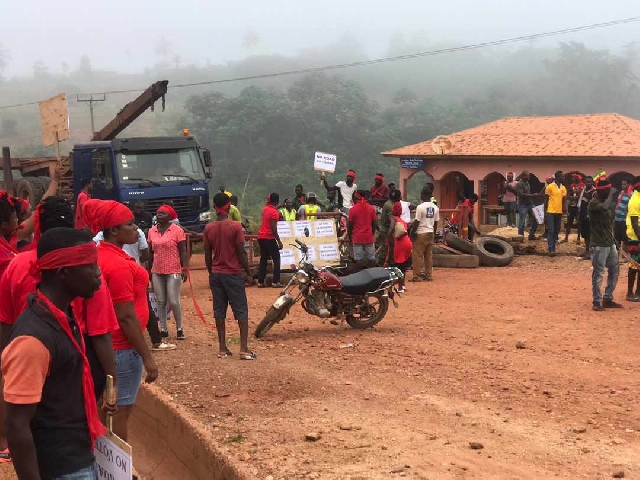 A/R: No road no vote; our husbands can’t have sex with us – Santasi Apire residents chant in demo

Residents and motorists at Santasi Apire of the Kumasi metropolis in the Ashanti Region have said they will not vote in the upcoming general elections if the government refuses to fix their roads before December 7.

The residents made this known during a demonstration to draw the government’s attention to the dilapidated state of the roads in the Santasi Apire community.

The residents were clad in red and blocked the roads to other motorists.

According to the residents, although the government declared this year as the Year of Roads, they are yet to enjoy their share of the national cake.

Speaking to Class News’ regional correspondent Elisha Adarkwah at the demonstration on Tuesday, 15 September 2020, a resident said: “My concern is that the whole world has seen today that Apire and Santasi have been crying over this bad road for a long time, and right now, this is the time we should demonstrate to the whole world that we all voters”.

“Why are they constructing other roads but they don’t want to work on ours? We don’t understand. How long should we wait? People are dying here, accidents are occurring here, how can a pregnant woman go to the hospital?” he asked.

“We’re all NPP supporters, no one is NDC. So, we’re pleading with the President to come to our aid, he should take measures to ensure it is worked on, otherwise, these people here, they’re crying they won’t vote for Nana Addo. What will happen, he will lose power…”

A female resident also said: “The reason we’re saying no road, no vote is that we the women are suffering because the drivers, they always have waist pain, they can’t have sex with us. This year, we’re not voting, if the road is not completed for us, we’re not voting.”

Another female resident stated: “We beg him, we voted for him, we’re begging him, he’s doing well for this country, what have we done to the President that our road is in such a bad shape? It has not been asphalted. I use a car and every time I get a flat tyre.”