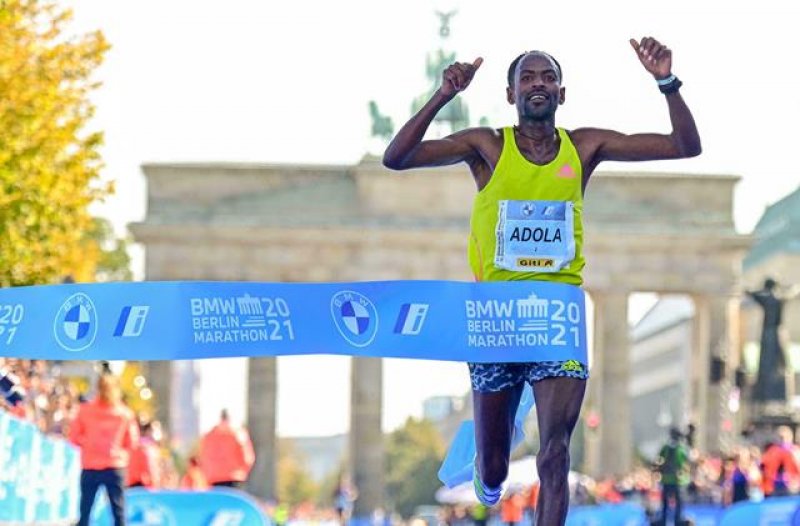 Ethiopia’s Guye Adola won the Berlin Marathon on Sunday, while his compatriot – and top favourite – Kenenisa Bekele missed out on a third victory in the city and finished third.

Adola finished well below Olympic champion Eliud Kipchoge’s world record, with a time of 2 hours 5 minutes 45 seconds. The record set by Kipchoge is 2:01:39 in Berlin in 2018.

“It was so warm that my feet were burning in my shoes,” Adola said after his biggest success to date.
Kipchoge himself was absent in Berlin and from all the northern Hemisphere autumn races as his priority was claiming back-to-back Olympic gold, which he achieved in August at the Tokyo Games.

After a two-year break from racing and a Covid-19 infection nine months ago, Bekele and the leading group were initially en route for a world record in late September heat and high humidity.

But, after 18 kilometres, the pace was too fast for 2016 and 2019 winner Bekele, as the group made it to the half marathon mark in less than 61 minutes, faster than expected.

After around 25 kilometres, Bekele was back among the leaders, who had to pay the price for the high pace under the sun.

“I wanted to do well in Berlin, but I couldn’t do as well as I had hoped. But that doesn’t mean my career is over,” he said.

In the women’s race, Ethiopia’s Gotytom Gebreslase won in 02:20:09. Top favourite Hiwot Gebrekidan, a compatriot, was second, 1 minute 14 seconds behind.

“Even though it was my first marathon, I wanted to win,” the 26-year-old Gebreslase said. Like Adola, she will also receive a 20,000-euro prize.

The Berlin race with 25,000 runners was the biggest marathon during the coronavirus pandemic to date, but it won’t hold the title long, as five further big marathons are scheduled in a six-week frenzy.

There was no race last year due to the pandemic. It took place this year on the same date as the German elections.