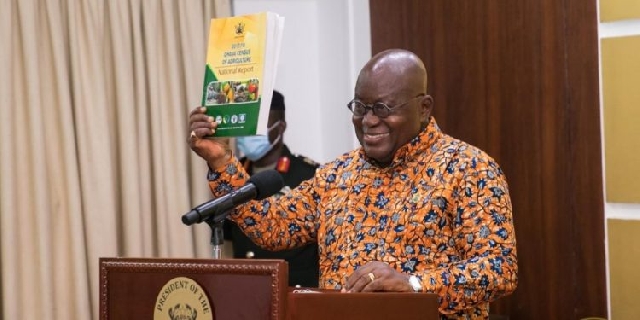 President Nana Addo Dankwa Akufo-Addo has launched the 2017/2018 National Report of the Ghana Census of Agriculture, the first time in some thirty-three (33) years.

At the event held at Jubilee House, the seat of the nation’s presidency, on Monday, 19th October 2020, President Akufo-Addo noted that the importance of agriculture to Ghana’s growth and development demands that the data on the sector, which informs the formulation of strategies and policies, as well as the monitoring and evaluation of such policies, must be accurate and up-to-date.

The President continued, “Shamefully, since then, for the last thirty-three years, no such census had been undertaken. Policy, prior to my assumption of office, had consequently been based largely on guesswork. It is no wonder that this period witnessed the systematic decline of our agriculture. We cannot afford such neg